Turkeys Are Guests, Not Food, At This Animal Sanctuary’s Thanksgiving Table 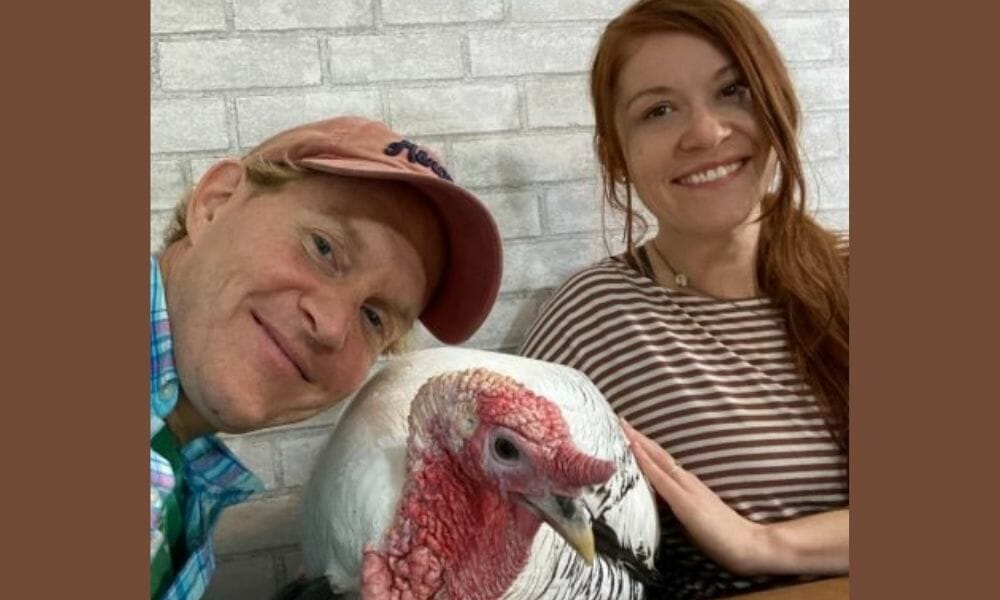 Ryan, Quincy, and Mallory (Courtesy of Life with Pigs)

During Thanksgiving, turkeys are guests at the table — not on the table — at Virginia-based animal sanctuary Life with Pigs.

There’s Quincy, the much beloved Royal Palm turkey ambassador and self appointed “guard of the yard” who greets visitors to the grounds by puffing himself up but really is “the sweetest,” said Life with Pigs’ Mallory Phillips.

Quincy has a habit of picking a child out of a school group and devotedly following that child around. He also is a rule-follower, who doesn’t like things out of their place, will break up rooster fights (or “affairs”  should the roosters’ eyes wander from their specific chicken), and enjoys long nights of pets inside on a blanket, she added.

There’s also Freddie and Tia — one a talkative turkey, the other more shy — who as tiny poults enjoyed running around after Quincy, said Mallory’s husband, Ryan.

Last year, the three turkeys enjoyed pumpkin halves stuffed with goodies as their Thanksgiving treat.  All three escaped from certain death on a factory farm to the Life with Pigs sanctuary when they were young, so this kind of loving and considerate care is what they’ve known for a long time.

While doing what they can to ensure their bird friends enjoy the holiday — which they’ve re-dubbed “ThanksLiving” — the Phillips also are painfully aware that about 40 million turkeys are slaughtered each year and never get that chance.

It’s why Thanksgiving is their least favorite holiday.

“Of all the holidays, it is the most food focused,” Ryan said. “When you ask people what Thanksgiving is about, maybe for some it’s about being thankful, but for most people it’s very much about what foods we’re going to eat and the idea that there has to be a dead turkey on the table.”

Both decided to become vegan, after separate experiences led them to align their actions with their love for animals. This holiday season, they’re thankful that people can choose from so many delicious, affordable, and accessible plant-based alternatives for their Thanksgiving feasts.

They’re also grateful for each other. The couple tied the knot in April, flanked by family members Jenna the Holstein and Maisie as “Best Cow” and “Cow of Honor,” and preceded down the aisle by Mallory’s dogs, Ryan’s pigs, and several chicken flower girls who admirably chased after some snacks thrown on their way past smiling extended human family members.

“Having somebody who understands you and wants to change the world with you is amazing,” Mallory said. “I feel very grateful to have somebody to share my life with who feels the same way as I do, and who not only doesn’t want to participate in [the factory farm system] but wants to do everything he can to change it.” 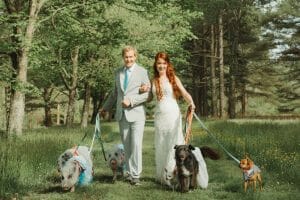 Ryan and Mallory Phillips, and their bridal brigade (Courtesy of Life with Pigs)

“It can be very lonely when you care about things so deeply, and it’s like nobody is listening or nobody cares or believes you,” he said. “You feel this, ‘I don’t belong in this world, I don’t fit in, or I’m alone.’ I’m grateful for having a partner in life to take on the world with, someone who values it and sees it in this way.”

The Phillips shared more with Lady Freethinker about tips for a humane Thanksgiving, their journeys, their turkeys and other animal residents, and how they’re planning to celebrate this year. Answers have been edited for length.

Listeners be advised that you may frequently hear a sharp, joyful noise throughout the audio, because — of course — Quincy joined in, even though it was past his bedtime.

How did this sanctuary begin, and why did you both feel so strongly called to this work?

RYAN: I studied history at William and Mary, and my focus had always been the pre-Civil War period. I had always admired people who came together over the cause of ending slavery, this horrendous thing that we were doing, and who were willing to risk their lives for something so worthy of fighting for. While obviously there are vast differences between these causes, there’s that similarity that there is this atrocity going on, and it’s so glaring that once you see it, it’s hard to unsee it. I was out protesting [as an animal activist] when one day a family told me about this pig they had adopted. Then one night, it was about midnight, the mom called and said there was a pig, Pumpkin, and they might kill her. I thought, “OK, I’m going to have a pig.” I was living in a condo on the second floor, and by the end I had three pigs, a Yorkie, a rabbit, and a chicken and I realized, “All right, this is not at all a working situation.” So I moved here to where I live now, which is still in Williamsburg, but it’s zoned agricultural.

MALLORY: Growing up, I had always loved animals, and I remember distinctly when my parents told me where meat came from and being really upset about that as a child. I was vegetarian for a long time, and then I went vegan. I felt very lonely for a while as a vegan, as someone who wants to change the world when everyone else seems very complacent with how things are, and I started following some sanctuaries on social media. I started following Life with Pigs, and I just thought there’s this adorable cow and this really cute guy. I had this crush, and then we ended up talking. It’s a complicated story, but I learned he was having a protest for an abused and neglected cow, so I used my dad’s airline miles and flew out from Arizona. He picked me up, and I think we both were like, “This is the person that I’m going to be with.” I came here and started learning about sanctuary life, and I love it. It’s great, we’re busy every day, but we get to have friends like Quincy and hang out with the coolest animals. 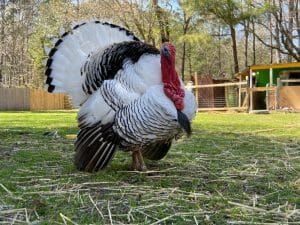 Quincy (Courtesy of Life with Pigs)

Tell us about some of the turkeys you’ve rescued… what are they like?

RYAN: They are escapees from a factory farm. They were tiny; you could hold them in the palm of your hand. They were adorable when they were little; they’d do this thing where they would run, and almost do figure 8s around each other, and they would fly up into the trees (although they’re not fliers, but more like semi-coordinated gliders) and then they would come down. They are such a family unit. Wherever one of them is, you can almost assuredly find the others. If a hawk flies over, you’ll hear them communicate to each other, letting everyone in the yard know there is a predator.

MALLORY: Any time there’s visitors, Quincy will be the first one who comes up. He gets all puffed up, he gets kind of red, his snood is extended all the way down and he’s showing people, “This is my yard, this is my place,” but he’s so sweet. He’s never pecked anyone. He doesn’t have a mean bone in his body. He just wants to follow everyone around. He likes kids, so he’ll usually find one kid out of a group and that will be his person for the day. We got the cutest video of this one little boy who Quincy had picked out of a tour and the boy started following Quincy back, and Quincy didn’t know what to do… they almost had this dance going on. It was super cute. 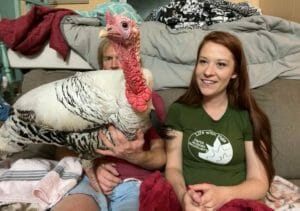 Quincy joined in our interview. (Via Zoom)

Has it been rewarding for you to see people interacting with these animals in a new context?

RYAN: We’ll get a lot of messages saying, “Our kid keeps talking about Quincy,” or that they can’t wait to come back and see him. A family came, just this past weekend, who wanted to sponsor Quincy because they were so enthralled.

MALLORY: Our hope, one of the reasons we want to stay small, is because we want people to have these really individualized connections. No one expects a turkey to really interact with them at that level, or stay that close to them, or to come up and greet them. I think a lot of people have the concept that turkeys are mean, and then they come and see Quincy and his ladies, and they are very surprised. People think our animals are very special, and they are — but they’re also the same animals that come from dairy, beef, turkey, and chicken farms. Quincy was literally saved from a farm and being someone’s Thanksgiving dinner. So yes, he is special and unique, but he is just one of many. He’s just an average turkey that was taken from one of those places. So we try to remind people of that: They are all unique, and they all have different personalities, and this is how all those animals are when they’re given a chance to be happy and to be with a family, a group of their own kind who treat them well and they feel safe and can be themselves. 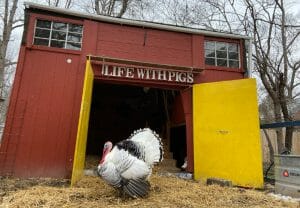 Quincy (Courtesy of Life with Pigs)

What are your plans for this Thanksgiving?

MALLORY: We’re going to do a video later this week about the many plant-based options that are great [for Thanksgiving dinner]. We’re doing a Thanksgiving event, too, where we are having some friends over and doing a potluck. Last year, we fed the turkeys, so we’ll probably do that again this year. It happens to fall on Charlotte the pig’s birthday this year, so she’ll have to be included.

What tips do you have for people to have a more humane, plant-based Thanksgiving meal?

RYAN: I would suggest to try it. Do a vegan thanksgiving. Make it like a game, a family game of figuring out how we’re going to do this.

MALLORY:  If you think about most of the food for Thanksgiving, it’s vegetables: mashed potatoes, green beans, stuffing. [For ours], it’s just made without [dairy] butter; there are so many vegan butters. 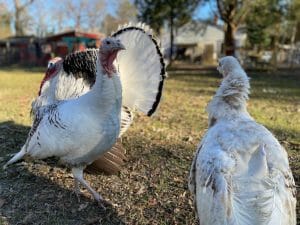 Any other thoughts about turkeys and Thanksgiving?

MALLORY: It just seems like if you’re trying to show gratitude that would be giving, not taking. Taking someone’s life away from them, that’s not showing gratitude, to me. My hope is that someday people will realize how amazing and special turkeys are, and killing them will not be the first thing that comes to their mind when they think of turkeys. They’ll think of having a friend, or having someone follow them or seeing them with their families.

RYAN: When Smithfield has their own plant-based line of foods, clearly the writing is on the wall. We can’t keep destroying the planet, destroying people’s health, and get away with it forever. We’re going to be called to task. I try to always convince people that everyone is vegan [at heart]. No one wants animals to suffer. No one wants that sort of thing to exist. So it’s aligning your actions with your values. That puts it into a different context for people. You’re not becoming vegan; you’re just trying to live the values that you already have.