Tribes Save Healthy Yellowstone Buffalo Once Slated for Slaughter 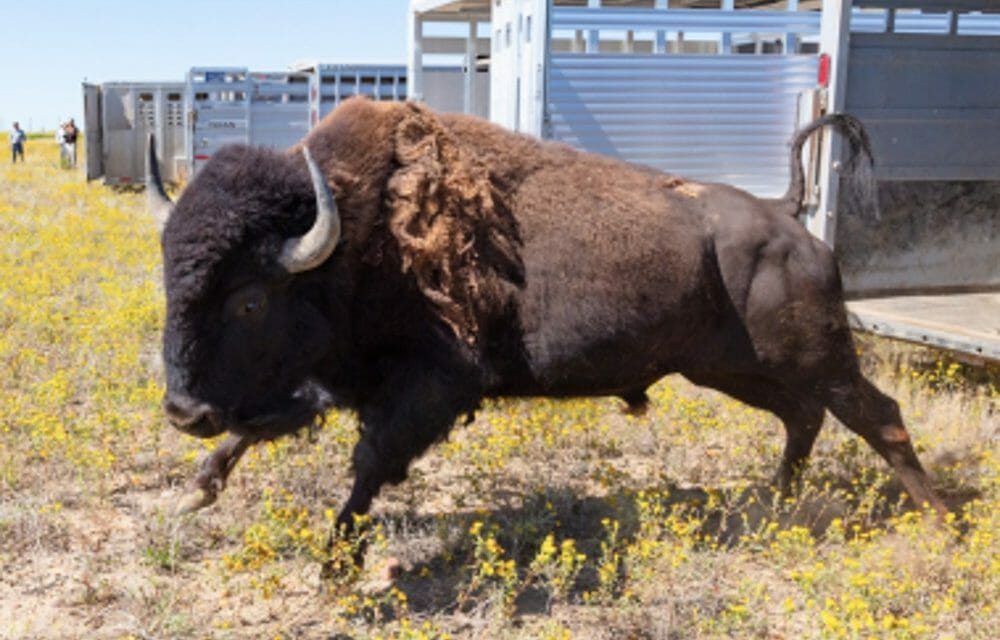 Fifty-six healthy buffalo from Yellowstone National Park who otherwise would have been slaughtered have instead been relocated to two tribal nations, as part of a national bison conservation program.

The Modoc Nation, in Oklahoma, and the Confederated Tribes and Bands of the Yakama Nation, in Washington, each received 28 healthy bison as part of the Bison Conservation Transfer Program (BCTP), an effort by tribal, nonprofit, federal, and state organizations to prevent disease-free Yellowstone bison from being slaughtered.

“These buffalo will go to tribes that are beginning their cultural herds,” said Robbie Magnan, director of Fort Peck’s Fish and Game Department. “Like Fort Peck and many other tribes, the Yakama and Modoc will once again have buffalo for their Indian communities and traditions.”

The relocated buffalo comprised two family units, said Troy Heinert, executive director of the Intertribal Buffalo Council (ITBC), a South Dakota-based organization with a membership of 69 tribes across 19 states and a mission to restore buffalo to indigenous people.

“This year we had two family groups at Fort Peck, and the goal was to keep the family structure,” Heinert told Lady Freethinker. “Tribes applied, and the Modoc and Yakama had the capacity and were interested in keeping the families together.”

Heinert, an enrolled member of the Rosebud Sioux Tribe, said that tribal people have learned many lessons from the buffalo and view the animal as their relatives. Buffalo feature in many indigenous Creation stories, including the Lakota’s, he added.

“For indigenous people, we’ve always had a connection to the buffalo,” he said. “In our Creation stories, for the Lakota, the buffalo came to us and said they would provide for us. For many tribes, buffalo are at the beginning of who we are as a people. We don’t view buffalo as a commodity. They are our relatives, and we try to treat them as such.”

He added that hardships created for tribal people due to the absence of buffalo on tribal lands, following mass slaughter in previous decades and actions by the federal government, also factors into tribal people’s desire for them to return.

“Controlling buffalo was a way to control Native people,” he said. “That’s an important part of understanding these restoration efforts. When you have healthy buffalo, we can become healthy as a people as well.”

More than 70 million buffalo used to roam the United States. But by 1900, due to overhunting and slaughter, their numbers had dropped to an estimated 200 to 400 animals, according to the National Park Service.  The ancient animals’ near extinction catalyzed conservation efforts that increased their numbers to around 3,000 animals by the 1990s.

At that point, society decided buffalo had enough space as a species, and “people raised concerns about disease transmission to livestock, damage to property, and competition for grass with cattle,” the NPS wrote in a 2020 bulletin.

“Managers began shooting animals that migrated out of the park or rounding them up and shipping them to slaughter,” the bulletin continued. “People drew lines on the map beyond which bison were not allowed to roam, unlike all other wild animals in the area.”

Those same dynamics surfaced this year, when park officials announced that the buffalo population in Yellowstone National Park had grown to 5,000 animals and authorized the removal of 900 buffalo – by shooting, slaughter, or relocation.

The NPS told media the decision was based on concerns about possible future overgrazing, although officials also noted no overgrazing has happened, and a 2020 publication from the same agency informed readers that bison’s grazing patterns actually lead to increased plant health and biodiversity.

The agency also justified the slaughter by citing fears that buffalo could transmit the disease brucellosis to cattle, although there has never yet been a documented case of buffalo infecting livestock, according to the National Park Service.

Buffalo still have both cultural and spiritual significance to many tribal nations, and the Yellowstone herd is the most genetically pure of all buffalo that still roam the United States, Heinert said.

“Yellowstone buffalo are the cornerstone of the species,” Heinert said in an interview with NPR.  “They’re the last free-roaming buffalo that go back to the same buffalo that our ancestors followed and made their life from. So tribes are very interested in keeping that species alive.”

A collaborative effort in 2019 by the National Park Service, the U.S. Department of Agriculture, the state of Montana, and the Fort Peck Assiniboine and Sioux Tribes created a program where healthy buffalo could be transferred to new areas instead of being sent to slaughterhouses. The program relocated 55 buffalo to the Fort Peck Indian Reservation in Montana.

Since then, the program has transferred more than 150 healthy bison to tribal nations. The bison first spend one to three years in quarantine, where they are tested multiple times for brucellosis, before being shipped to the InterTribal Buffalo Council, which then distributes them to tribes throughout North America.

The program emphasizes on its website the value of each member of the Yellowstone herd to tribal nations.

“The large herds provide unparalleled reconnections of people to the long-lost herds that once roamed the continent,” the site says. “To many tribal members, returning bison to tribal lands goes well beyond finding an alternative to slaughter. It is about restoring a part of themselves that is missing.”

The 2020 NPS bulletin also pointed to the regenerative ecological benefits of free-ranging bison, saying that their absence would spark a shorter season of plant growth in which plants would not be as nutritious or as diverse.

“There is not another bison population who, by their sheer numbers, restore lost ecosystem processes across large landscapes,” the agency wrote.

Currently, about 75 percent of healthy buffalo eligible for the transfer program are instead slaughtered. Improvements underway to expand the transfer program – supported by the Fort Peck Tribes, the NPS, and nonprofits Yellowstone Forever, the Greater Yellowstone Coalition, and Defenders of Wildlife – aim to reduce that number closer to 35 percent.

Heinert said the biggest conservation challenge currently relates to the lengthy quarantine the animals need to undergo before they can be declared brucellosis-free and shipped to tribal nations, as well as the limited number of quarantine facilities. The ITBC is actively working with the NPS and other partners to review those requirements to see if they can be shortened — safely.

“Our biggest challenge is revising the quarantine procedure, and we are working with others to make sure that there are facilities for that, as well as on tribal lands,” he said. “We don’t want to introduce any animal with disease to a tribal herd, so we are very mindful about that.”

In the meantime, the ITBC will continue to raise awareness about the importance of buffalo, offer grants to help tribes establish or increase their herds, and advocate for legislation like the Buffalo Management Act, which would create a permanent program within the Department of the Interior to develop and promote tribal ownership and management of buffalo and buffalo habitat on Indian lands, Heinert said.

“Our ultimate goal is to restore buffalo to tribal lands for that cultural connection,” he said.

The Intertribal Buffalo Council wished one relocated buffalo and his family safe travels in a recent Facebook post.

“He and his family are survivors of harsh winters in Yellowstone National Park, capture, and years of testing for disease,” the organization wrote. “Safe journeys to this one and his family. They will carry on his species and their restoration to tribal lands and people.”

Heinert told the Kilgore News-Herald that outcome has made the hard work worth it.

“For me, knowing the journey that these buffalo have been on to get to this point, and knowing they are going to be revered by a tribal nation, there’s a sense of fulfillment,” he said.