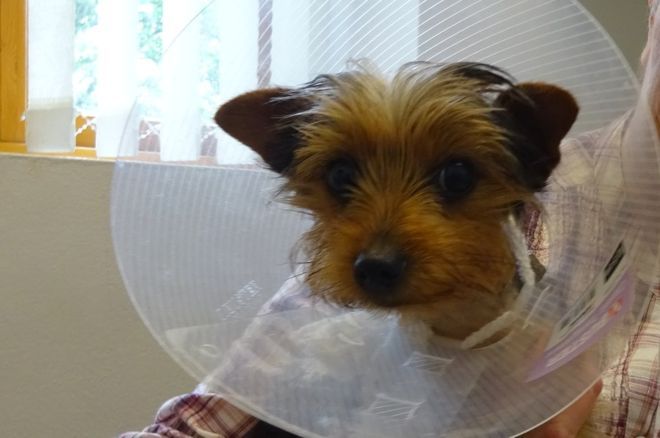 A Yorkshire terrier named Jago went into the operating room in Cambridgeshire, England, to become one of the smallest animals to successfully receive a balloon catheter to correct a heart valve defect.

Jago was first diagnosed with the defect, formally identified as pulmonary stenosis, when he was only seven weeks old, but at a mere 3lb (1.4kg), veterinarians determined that the procedure that would save his life was too risky to perform on such a small animal.

Pulmonary stenosis affects the blood flow from patients’ hearts, and makes it incredibly difficult for their hearts to pump blood to areas where valves are not inflated properly. If left untreated, early death is expected.

Cardiology specialist Jon Wray performed Jago’s keyhole surgery, which took 90 minutes and cost approximately $4,100 (approximately £3,500). The innovative procedure, which is designed to be minimally invasive, uses a balloon to re-inflate defective valves, removing it immediately afterwards. After the keyhole surgery was completed, Jago was left without any stitches.

Jago, who recently celebrated his first birthday, has fully recovered, and is expected to live a long and healthy life.

The keyhole surgery Jago received is one of many recent medical advancements for canines in need. A woman named Silvie Bordeaux invented a three-piece navigation device, or “halo”, designed to allow blind dogs to live healthier, more active lives; over 800 halos were distributed worldwide last year. It’s safe to that say dogs everywhere will soon be able to remain man’s best friend for longer than ever.