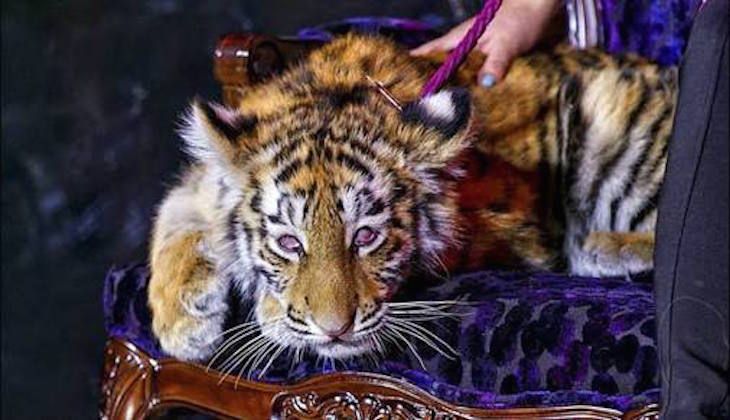 An endangered five-year-old female Siberian tiger cub named Crystal was heavily drugged and paraded in the opening night of a new Vladivostok Casino Tigre de Cristal in Russia. The animal was so heavily drugged that she could barely open her eyes. Her inner eyelids drooped shut, leaving her with a blank red stare.

Casino’s spokesperson has freely admitted drugging the young cub, to the Siberian Times, saying, “For security purposes, so Crystal would not bite anybody, she was given a sedative.”

“The tigress still is small, so it was impossible to do an injection. The vet came and gave her a liquid medicine in a bottle. She slept all the time.”

Head of Laboratory Centre for Animal Disease, Irina Korotkov, confirmed the young tigress was artificially sent to sleep with medication.

Sergei Aramilev of the Amur Tiger Centre wanted to know what sedative was used on the cub. He said, “There are cases when pet owners give sleeping pills to the animals.”

“We need to understand exactly in each case, to learn from veterinarians, what was the medicine and what might be the consequences, is it harmful to the animal, is it addictive. In terms of moral and ethical aspects, it is not good.”

The Casino bought the tiger cub for 450,000 rubles (US $6,800), and transported her 7,800 kilometers from Ufa Zoo to Vladivostok, just three days before parading the young cub through the Casino, according to Russian media. It’s still unclear why the baby tiger is not with its mother.

Casino owners are accused of torturing the cub by making it parade in a heavily crowded environment with loud music and bright colors.

Local blogger Irina Butkovska said it was ‘very frustrating’ that the casino “began with a crime-animal abuse.” The public’s reaction revealed that no one was happy looking at the tiger suffering in this manner.

Tigers are one of the precious and rare creatures on this planet Earth. In the 1930s, there were only 20 to 30 Siberian tigers; after they were hunted to near extinction. Although heavily protected now, there are still very few Siberian tigers left in the wild. The constant demand of Tiger’s bone and other body parts used in traditional Chinese medicine leads to the fact that tigers continue to remain under serious threat.