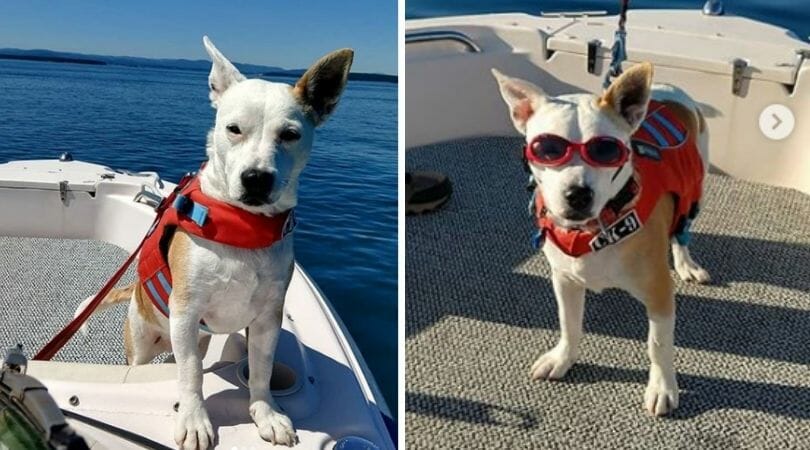 Orca researcher Dr. Debra Giles adopted the left-behind pooch without any plan to train her for this valuable work.

“I had no idea when I kept her that she was going to become a conservation canine,” Dr. Giles told TODAY.

Eba was just a few weeks old and weighed only three-and-a-half pounds when she appeared outside a Sacramento, Calif. shelter. Very cold and wet, Eba had to warm up on a heating pad before rescuers could take her temperature. The pup spent months recovering before ending up in Giles’s care.

It quickly became apparent that Eba was a perfect candidate for Conservation Canines, a program run by her guardian’s employer, the University of Washington Center for Conservation Biology. The organization rescues dogs, many of whom end up at shelters due to their high energy levels, and trains them to detect whale scat.

Eba’s persistently playful nature got her the initial interview. Giles asked the program’s director for permission to take her newly-adopted pup out to sea, and the rest was history.

Eba proved to be a natural and has worked with Conservation Canines ever since.

“By Eba’s second day on the water, she found her first wild whale scat by herself,” Giles, who documents the dog’s adventures on Instagram, explained, “which was amazing.”

Whale scat provides researchers with important information about orcas’ stress levels, whether they’re pregnant, what pollutants they are ingesting, and more. By detecting the feces, dogs like Eba provide an invaluable service to those who are working diligently to save endangered whales.

“That’s where the dog comes in because they can smell these things from a mile away,” Giles said, “literally a mile away.”

Eba’s story reminds us that the so-called ‘undesirable’ traits that often land dogs in shelters are exactly what makes them special to some pet parents, and that there’s a perfect forever home for every companion animal.