Home » Animals » The Tanzie Project: How a Deployment Overseas Led to a Lifesaving Dog Rescue in the BalkansBy Lex Talamo | June 21, 2021 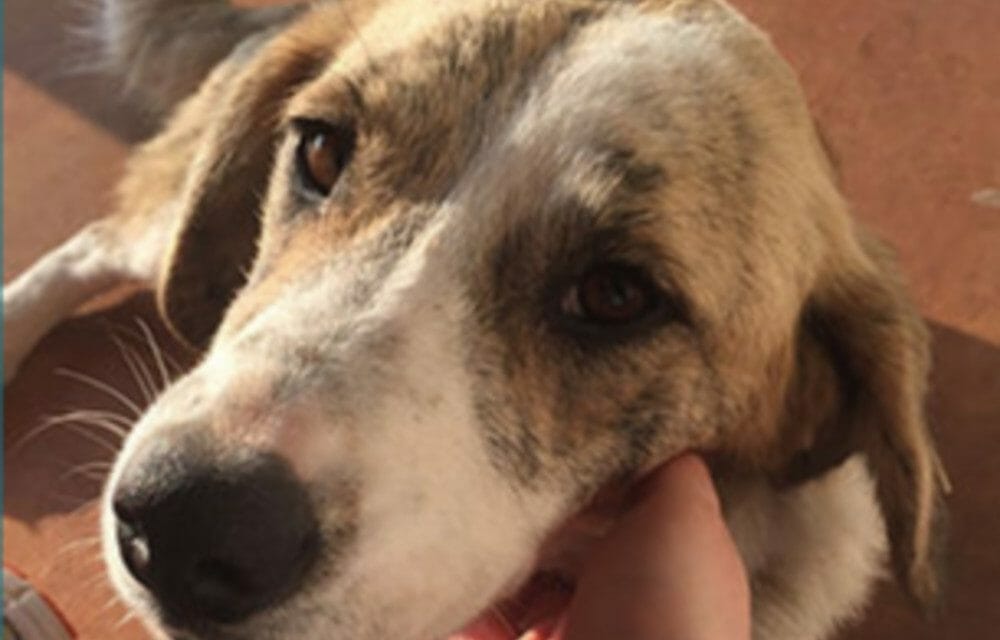 When Katie Ward received deployment orders for Bosnia, she knew her life would change. But as a young airman, she never imagined her experience would lead her to found the Tanzie Project — a rescue for Bosnian dogs.

The Balkans are a notoriously difficult place for strays. The almost 4-year siege of Sarajevo — the capital of Bosnia and Herzegovinia — left many Bosnian families destitute and homeless, with their animals turned loose on the war-torn streets.

Those abandoned animals had litters, who as strays then faced being kicked, beaten, abused, or run over given a lack of official humane or cruelty prevention agencies in the country, according to the Tanzie Project.

One of those street dogs — a lean tan and white female — was living outside Ward’s base when she landed in Bosnia in 2015. The pup had a tag in her ear — 384 — and came running when Ward first noticed her.

The dog then strategically proceeded to make Ward fall in love with her.

“All she wanted was attention, a trait ordinarily unattributed to street dogs, who normally avoided people,” Ward wrote on her blog about that fateful day. “This dog, tag #384, was slowly stealing my heart. I couldn’t imagine leaving her behind.”

Ward always made time to give the dog, whom she re-dubbed “Puppy Girl” in the early days, an exuberant hello and a few pets.

Then one day, tugged by her heartstrings, she called her husband Walker and told him she needed him to come to Bosnia to get Puppy Girl.

“She had done this before,” Walker Ward told Lady Freethinker, almost nonchalantly, as he recounted another experience years before when Katie had spotted their soon-to-be-adopted dog Bella in a cage in the back of a truck and rescued her. 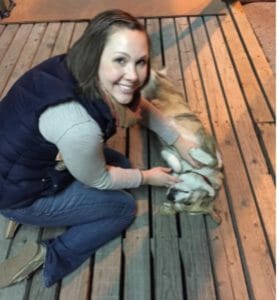 But with Puppy Girl — now renamed Tanzie — safely on her way stateside, Katie Ward felt the tug in her heart grow stronger.

Ward started a fundraiser to buy dog food to give to local animal advocates and connected with The Puppy Rescue Mission, which helped her rehome some of the dogs.

“Forging friendships and partnerships across continents, oceans and languages, all because of a stray dog, wasn’t exactly in my reporting instructions,” Ward wrote on her blog about that time.

If Ward needed any additional indications from the Universe that she and Tanzie were meant for each other, as was this unexpected diversion in her path, she noticed the name of the street where she first found Tanzie a few days before her departure back stateside.

The street was called “Ward’s Way.”

“Tanzie and I started this whole new crazy life together all because I drove down that road,” she said about the synchronicity. “If I didn’t know any better, I’d say our path was meant to be.”

Years, obstacles, and many success stories later, Ward said she has no regrets.

“I am so grateful Tanzie found me, half a world away from home, and decided to leave her pawprints on my heart,” Ward wrote on her website. “Now my mission is to save as many of these street dogs as ‘pawsible’ because they deserve a chance to bring a family as much joy as Tanzie has brought us.”

Becoming a nonprofit was its own journey, Ward said.

When she first became more active, multiple people reached out and told her to start and organization. She always declined, saying she was active duty and just wanted to do a little “here and there.”

But one night, after a bottle of wine, she told her husband they were starting a nonprofit. And that was that.

The Tanzie Project, founded in 2015 to bring awareness and support to saving stray, forgotten and displaced pets in the Balkans, has rehomed more than 330 homeless dogs to families in the United States, the United Kingdom, Canada, Germany, Austria, Switzerland, Spain, Denmark, and the Netherlands, according to the nonprofit’s website.

One of their happy adopters is Sylvia Hauk, who lives in Vienna with her new sweetheart Holly.

Hauk, 52, had spent the last 25 years with dogs. When the last of her companion animals passed away, she said her life changed — and not for the better. In 2018, she slipped two discs in her back but couldn’t motivate herself to do the needed physical therapy.

“The doctors wanted me to walk more,” she told Lady Freethinker. “I tried to force myself up to walk my rounds, but to be honest, it bored me, and that’s why things didn’t get better.” 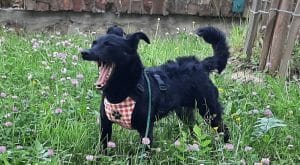 A year later, in 2019,  someone burglarized her first floor apartment, sending her into a panic and a depression.

“As long as I lived with dogs, nothing ever happened,” she said. “I had to make a decision. Either give up on myself or to go back to life and share it with a dog.”

An internet search took her to the Tanzie Project. From the first email contact, Hauk said she felt “like talking to friends.” Although COVID-19 and lockdowns on the Austria and Slovenian borders complicated the adoption process, when the Tanzie team sent her a picture of Holly, Hauk knew.

“Ever since Holly has moved in, life is so much better,” she said. “She makes me smile and laugh every single day. With her, every day is a good day. We enjoy every moment.”

With four walks a day, play time, and cuddle time with her new companion, Hauk said her health and happiness also are improving.

“I’m very grateful for her rescue and I can’t imagine a life without her anymore,” she said. “We are both living the good life now!” 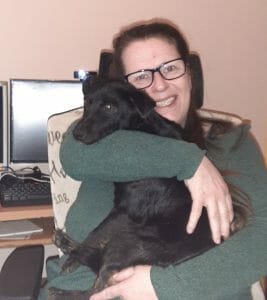 Beyond adoptions, the Tanzie Project also has distributed more than $25,000 of vet supplies, paid for more than $3,700 of vet care costs, and provided more than 26,700 meals to shelter pets since its inception, according to its Guidestar profile.

The U.S-based nonprofit partners with local, on-the-ground rescues to shelter and care for dogs awaiting adoption.

The Tanzie Project has an entire page on its website dedicated to answering the question: Why adopt a dog from Bosnia, when so many dogs in people’s home countries also need help?

Ward summarized her answer to the “zero percent chance” that dogs in the war-torn country have of getting adopted using a telling example.

“If you see a dog walking the streets in the United States, your first thought is usually, ‘Oh no, someone’s dog got out,’” she said, “whereas in Bosnia, it’s ‘Oh look, another forgotten stray dog, with no place to call home, maybe we should call the dog catcher and get rid of it.’”

COVID-19 has made the last two years more challenging for the team in placing their dogs. Required “quarantine fees” have increased costs, and constantly changing travel and border regulations and restrictions have delayed adoptions for months.

“I know there are a lot of things going on in the world right now,” Katie Ward said. “I hope these adoption stories help share the love and joy of those groups trying to make the world a better place.”

The group also has urgent needs to cover administrative costs to continue their mission. Those interested in that specific fund can learn more here.