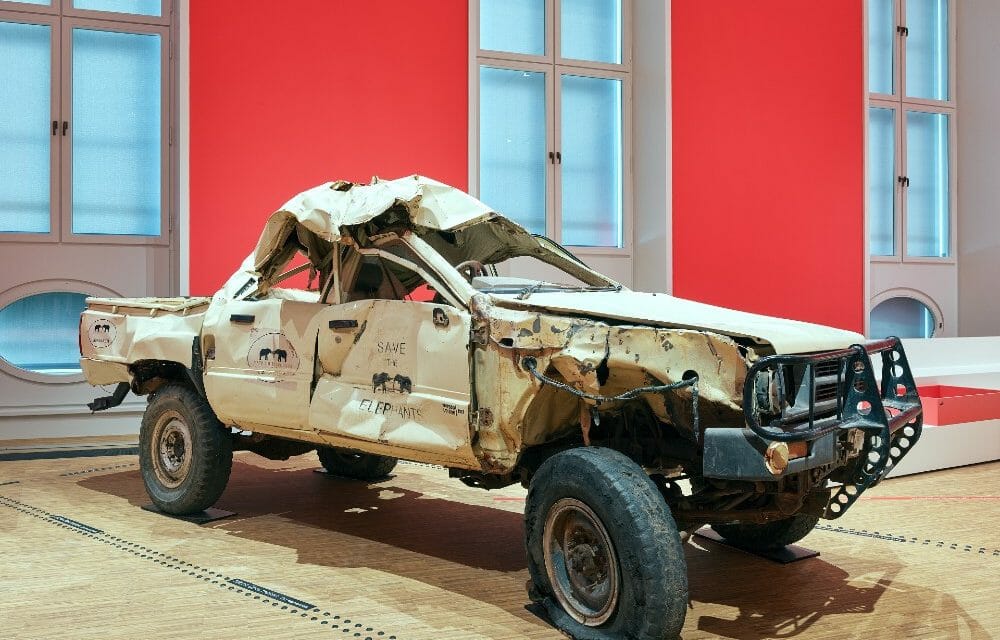 The grunts and groans of a dying elephant echo through the halls of the Humboldt Forum gallery in Berlin, Germany — a haunting backdrop to a new exhibit that tracks humanity’s 40,000 year obsession with the cruel and controversial ivory trade.

“Terrible Beauty” juxtaposes ornately-carved netsukes, figurines, masks, and other ivory objects next to jarring displays showcasing the mass scale and violence of poaching — including an off-road vehicle battered by an elephant attack and a photograph of dozens of tusks seized from the illegal wildlife trade and set ablaze by Kenyan authorities to prevent re-circulation.

Signs throughout the space highlight humanity’s assault on these gentle giants throughout the ages, from early carvings excavated from Germany’s Swabian Mountains thousands of years ago to the extinction of the North African elephant during the late Roman period.

Demand for ivory grew in the Gothic period, fueled by increased traffic between Europe and western Africa, and then exploded in the 19th century when more than 20 million African elephants lost their lives to poachers, the exhibit notes.

“Terrible Beauty” also shows how ivory use expanded from “spiritual” items in various cultures to objects of everyday use, including billiard balls and doorknobs.

Conservation messaging and a call to protect elephants is present throughout the exhibit.

“Ivory is inextricably linked with the exploitation of both people and nature, the threat of elephant extinction, poaching, and organized crime,” the exhibit’s description notes. “What can animal protection look like today?”

Workshops accompanying the exhibit encourage school-aged youth to tackle that question. One offering, geared to children in grades 4 through 6, exposes youth to discussions on animal welfare and the international ivory trade, while another workshop, geared at students in grades 7 through 10, engages youth with ethical and environmental modern-day issues — including the prevalence of wildlife being posted on Instagram for views.

The “Be Strong for Elephants” workshops also examine human-elephant conflict and outline what people can do to raise awareness and ensure that their travel plans and consumer choices minimize that conflict.

The Humbolt Forum’s press team said that even with that messaging and offerings, the reaction to the exhibit has been mixed.

“The diverse, controversial media reaction alone shows us that the exhibition has brought the issue to the public’s attention,” the team told Lady Freethinker via email. “We will certainly deepen this through our ambitious discourse and film programme, which will start soon.”

The exhibit has attracted more than 40,000 people since opening two months ago, and staff are “very satisfied with that,” the press team said.

The turnout is aligned with what Hartmut Dorgerloh, the Forum’s general director, told The Art Newspaper  — that the exhibit aims to address the “problematic issue” of the global ivory trade while stimulating discussion. 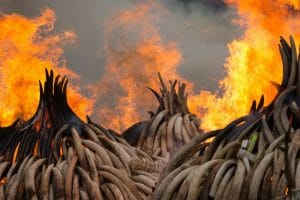 A film series, featuring 20 documentaries about elephants, and a discussion series that aims to reframe people’s attitudes toward nature, are part of that goal, according to the Forum’s website.

Preparing for the exhibit took several years and many discussions — including over whether ivory should be exhibited in museums at all, the press team said.

“Dealing with the subject was a challenging process because it always raise the question of what can be shown today and how,” she said. “The result is a highly programmatic exhibition for the Humboldt Forum, which at the same time demands a decisive stance from the museum. After all, it is above all about the atrocities inflicted on another species, which is a key stone animal of high sensitivity, with which we share the planet.”

A note for concerned readers: While the horrors on display show the brutal reality for innocent elephants poached to death, the elephant who provides the exhibit’s background soundtrack died from natural causes, The Art Newspaper reported.

The exhibit was developed by Berlin State Museums and Berlin’s Natural History Museum, in collaboration with the National Museums of Kenya, and will be on display through Nov. 28.