Subway Debuts Plant-Based Meatball Sub – So How Does It Taste? 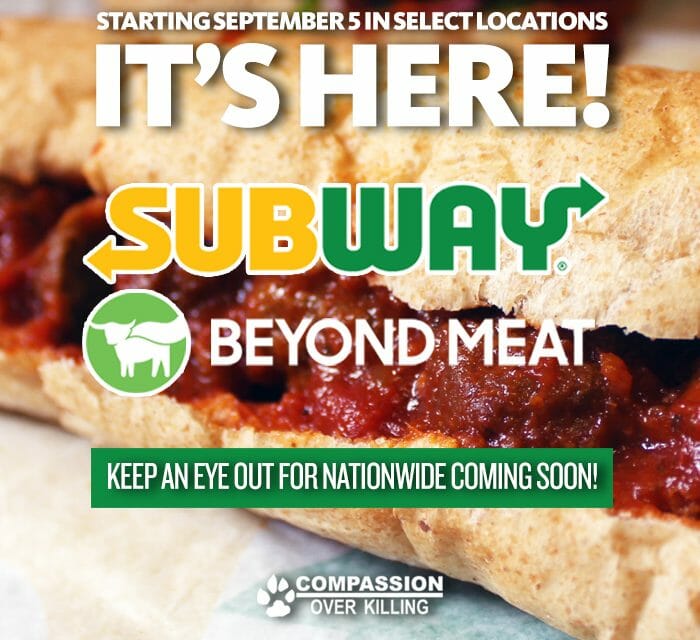 Plant-based eater and Subway fan? You’re in luck. The sub sandwich franchise now offers a plant-based “meatball” marinara sub for those who want to indulge in the classic comfort food while respecting animals and the planet.

After thousands signed the WeLoveSubway campaign for more meatless menu options, Subway partnered with Beyond Meat to offer a new vegetarian meatball sandwich, which can be made fully vegan by omitting the cheese.

But how does it taste? Compassion Over Killing‘s Senior Director of Campaigns & Outreach Laura Cascada reported that the “Beyond Meatball” Marinara sub passed her taste test with flying colors.

“This sub is literally going to save lives as more and more people choose it over traditional meatballs,” Cascada said. “And the good thing is, there’s really no difference in taste.”

The sub sandwich will be available for a limited time at participating restaurants beginning September 5 in the U.S. and September 9 in Canada.

Several fast food chains are joining the movement by offering alternative meat dishes. The plant-based options have become so in-demand, they often sell out.

Burger King’s “Impossible Whopper” was received so well, the company plans to roll it out to every location nationwide. Del Taco, Carl’s Jr., and other chains have followed suit by adding menu items with meatless proteins, too.

Thanks to companies like Subway, it’s easier than ever to maintain an animal- and planet-friendly diet and still satisfy those favorite food cravings.