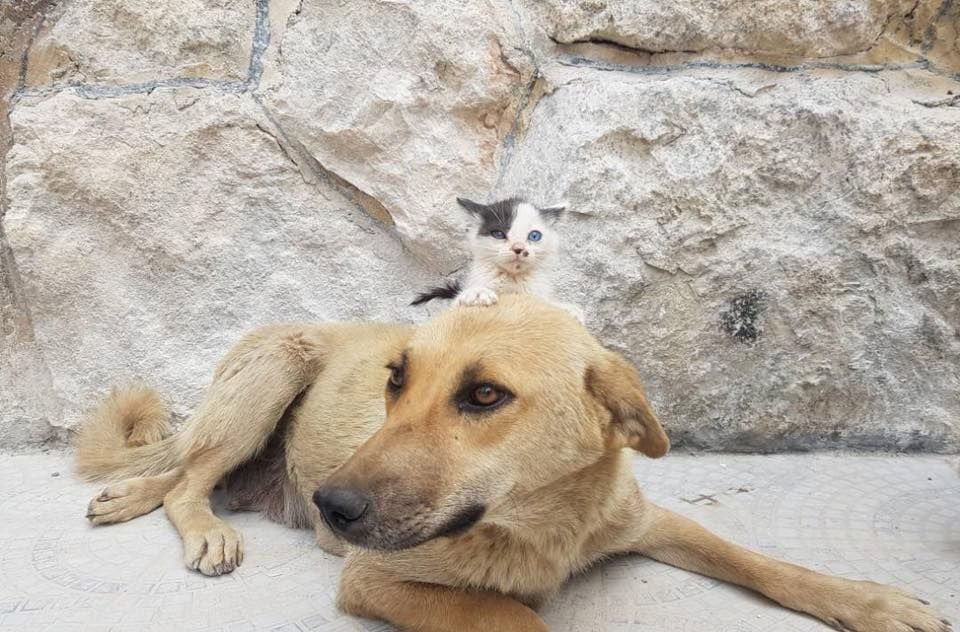 A sweet stray dog by the name of Amira ‘adopted’ a stray kitten called Junior after sadly losing her own litter of puppies.

Amira, with her beautiful amber eyes, is from the war-torn region of Aleppo in Syria. Lucky for her, she was discovered and taken in by the famous ‘Cat Man of Aleppo’, Mohammed Alaa Aljaleel, who rescues stray cats in his home town. Pregnant when she was taken in, Amira unfortunately produced three stillborn puppies. 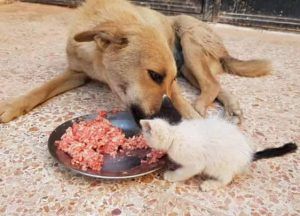 Not long after this, she met and bonded with adorable Junior, a tiny black and white kitten, and the two became fast friends who were seldom apart.

“We found them playing together, and the kitten climbed on her back, and Amira was completely fine – she even seemed to be smiling,” said one of the sanctuary volunteers. 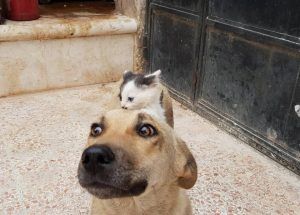 In a tragic turn of events this week, it was reported on Aljaleel’s Facebook page that tiny Junior was found dead.

“All of the Il Gattaro team are heart broken at the loss of our little star. Please join us in remembering him with love,” said the Facebook post

Only two days after the devastating loss of Amira’s best friend Junior, a puppy named Henry was rescued from a barrel of oil and brought to the sanctuary. The team are planning to introduce Henry to Amira, and we will continue to follow the amazing work that these dedicated animal-lovers are undertaking every day. 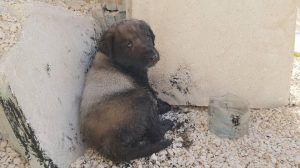 “Maybe this is a sign of destiny and he will be a good friend for Amira. In the next days we will present them to each other,” said the team on their Facebook page.

The city of Aleppo, Syria has been heavily affected by the Syrian Civil War, which continued for seven years. Formerly a busy city with over two million residents, it was virtually turned into dust and rubble over the course of the conflict.

Mohammad Alaa Aljaleel is a former paramedic who started rescuing stray and abandoned animals in 2013, and as the war worsened, the number of cats in his care grew to nearly 200. In 2015, the rescue center, named “Ernesto’s House” after his first cat, was decimated in a bomb strike, killing most of the cats and forcing Aljaleel to flee.

He has now rebuilt a home and is rescuing cats again, an inspirational ray of kindness amidst the desolation and the rubble.