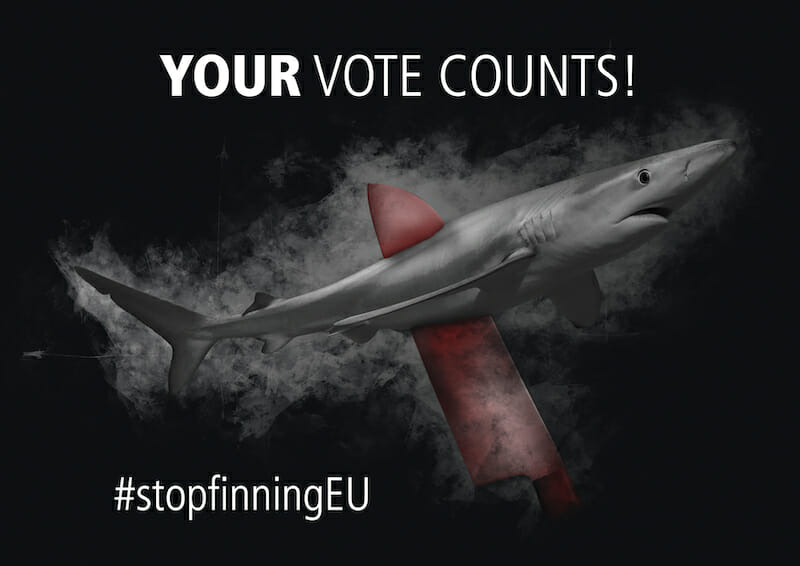 A new initiative spearheaded by European citizens seeks to end the bloody and brutal practice of slicing fins from fully-conscious sharks and throwing the bloodied animals back into the ocean – otherwise known as “finning” – within the European Union.

Each year, an estimated 73 million sharks are slaughtered solely for their fins, which become the centerpiece of “shark fin soup” – considered a delicacy and status symbol in Asia, according to “Stop Finning- Stop the Trade,”  a new initiative supported by more than 70 European organizations and close to 600,000 citizens.

To “save space” on fishing vessels, crew will pull the sharks from the ocean, cut off their fins, then throw the animals back into the water. Because they can’t swim, the sharks then endure bleeding to death, suffocating, or being eaten alive on the ocean floors, Stop Finning said on its website.

While the European Union has banned finning on board its vessels and within its waters since 2013, the current “Fins Naturally Attached” regulation still allows countries to trade detached fins from unknown sources.  Given scant inspections at sea means many of those fins likely are illegally retained and traded, in circumvention of the intent of the EU’s laws to stop the gruesome cruelty, according to the campaign.

The campaign seeks to close that loophole by extending the regulation requiring sharks’ fins to remain attached to their bodies for all imports, exports, and transit of sharks and rays within the European Union.

Organizers pointed to existing language that notes that sharks are a necessity, whereas using them for tasteless and dangerous “food” is not, although the EU on average exports 3,500 tonnes of fins each year, according to the campaign.

“The current Fins Naturally Attached Regulation states: ‘Sharks are not a traditional European Food, but they are a necessary element of European marine ecosystems,” the campaign’s organizers noted. “It is time to finally take consistent action in Europe to protect sharks and our oceans.”

Spain is the leading manufacturer of unprocessed shark fins in Europe, according to data from the campaign that showed that France, Portugal, Italy, the United Kingdom, and Malta also export significant tonnage.

The demand for shark fins  – which are made of cartilage tissues, and so have no specific taste or flavor  – also has led to increased demand for shark oil and shark meat, which past studies have found contaminated with methylmercury, which can poison people if consumed in even small amounts.

The amendment would not only help protect sharks and people but also the marine environments they inhabit.

About one-third of known shark species currently are considered endangered. Species including the Blue Shark and the endangered short-finned Mako also are overfished for their meat and oil, which features in some moisturizers and cosmetics.

“As a result of this massive overexploitation, the marine ecosystem is in danger since sharks create a state of balance through their role as top predators,” the campaign’s website states. “If sharks are wiped out, the entire food chain and its ecosystems collapse irreparably, thus profoundly affecting the entire planet, including humanity.”

The campaign says that once the petition gains 1 million signatures, the European Commission will take the proposal to the European Parliament to prohibit the trade in ray and shark fins in the European Union.

As of this story’s publication, the petition had been signed by 540,410 people.