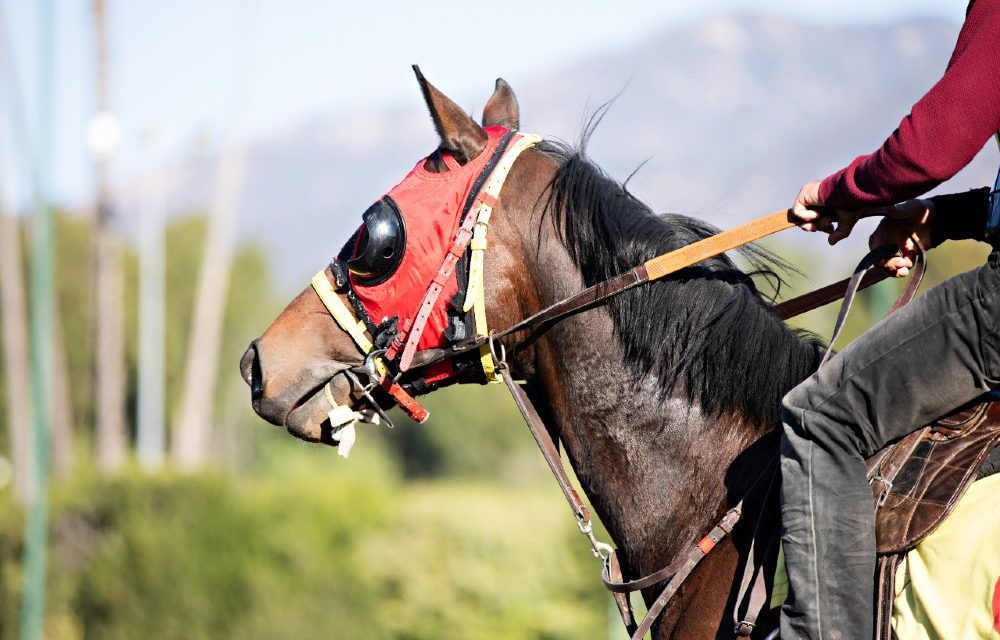 Editorial Note: This investigative report contains graphic images that some readers may find distressing, as does Lady Freethinker’s supplemental report through Aug. 18, 2022.

The young colt, who had never raced before, began acting unsettled when two horses performing a high-speed workout nearby approached him. Despite that behavior, See You At Front’s handler forced him to continue with the workout.

Before the sun had even fully risen, See You At Front was dead — the victim of a broken leg and a subsequent killing at 6:25 a.m., according to a necropsy report obtained by Lady Freethinker (LFT) through a public records request to the California Horse Racing Board (CHRB), the state agency that oversees the horse racing industry.

While nearly a quarter of California’s horse racing casualties barely get to live, instead dying before age 3, the brutal multi-billion-dollar industry also doesn’t spare the elderly.

Earlier this year, Hi Fidelity, a 14-year-old horse, was scheduled to run in the first race at Cal Expo but instead collapsed in a barn, had seizures over the course of 20 minutes, was not able to get up despite treatment and was killed — after almost six hours of suffering, according to public records documents.

See You At Front demonstrated lameness four to six weeks before his fatal injury, and Hi Fidelity’s trainer noted the horse “had become a bit spooky with age and started to see things and jump when jogging,” according to public records documents.

Both tragic deaths could have been prevented, had the handlers put the horses’ welfare before the possibility of profit and retired them from racing. But these two sorrowful stories are no anomalies.

Despite touted reforms started in 2019, California’s race tracks are still leaving defenseless horses sick, beaten, drugged and dead. According to an LFT analysis of public records documents and information published by the CHRB since the reforms:

While Los Alamitos Race Course, in Orange County, and Santa Anita Park, in Los Angeles County, remain the most deadly and dangerous tracks for the time period LFT analyzed, injuries and violations spanned the state’s tracks.

There’s only one clear solution to stop the suffering: California must ban brutal, state-sanctioned horse racing.

The CHRB declined to answer LFT’s questions, instead referring us to the organization’s website. 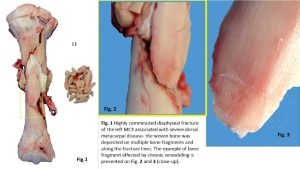 It’s already been another deadly year for California’s racehorses.

At least 42 horses have died or were euthanized as of Aug. 18, with  Los Alamitos leading the death toll with 11 fatalities — or 26 percent — and Santa Anita Park and Golden Gate Fields following closely behind with nine horse deaths each, according to horse fatality data.

While proponents of horse racing often describe the blood sport as elite and “glamorous,” the necropsy reports instead repeated tragic tales of horses who died with ruptured ligaments and tendons, broken bones, hemorrhaged muscles and tissues, and chronic cartilage loss, stomach ulcers, bone spurs, inflamed joints and tissues and degenerative joint disease – even for young horses.

One of those innocent casualties was Ballet Royalty, a 6-year-old mare who died suddenly on March 12 while being unsaddled after a race at Los Alamitos. The necropsy report pointed to heart failure and lung hemorrhaging, likely induced by the race, as the probable cause of death.

Like Hi Fidelity and See You At Front, Ballet Royalty had a painful history. The horse, who had run 24 races at the time of her death, was placed on the veterinarian’s list several times for intra-articular injections, commonly used to address painful, inflamed joints or lameness – meaning her death also could have been prevented had this ailing horse been retired from racing.

Ballet Royalty’s pain-wracked life was not at all out of the ordinary at Los Alamitos. Between January and May this year, an average of nearly 11 horses were added each week to the veterinarian’s list after being deemed unfit, unsound or not ready to race, according to LFT’s analysis.

The situation at Santa Anita Park was similar, with an average of nearly 12 horses added weekly to the veterinarian’s list between January and May.

One of the casualties at Santa Anita this year was Warren’s Show Time, a 5-year-old thoroughbred killed in February after training and fracturing a leg at the track. A necropsy showed ruptured ligaments and tendons, cartilage loss, degenerative joint disease and stomach ulcers, with a note that the horse’s fatal accident likely stemmed from “high-speed exercise” and “not having any breaks nor layoffs.”

Alleged violations that included excessive whipping of horses, failure to maintain required medical records and conduct needed pre-work exams (to ensure horses are healthy prior to racing), and illegally drugging horses also surfaced across the state’s sanctioned tracks, with the CHRB filing 71 complaints against its licensees over this year’s first 5-month span, involving at least 50 horses. 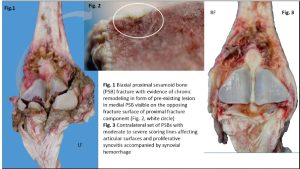 Horse Racing Is an Inherently Cruel and Corrupt Industry

More than 7,300 racehorses have died in California’s racing industry since 1990, according to CHRB data.

A spike in horse deaths in 2019 sparked legislative reform, with California Gov. Gavin Newsom signing a bill that created new criteria for licensing, screening, examining and veterinary monitoring, as well as new rules for medications and drugs used on horses. The CHRB also put out a long list of recommendations for improving conditions for horses.

But records show those reforms have not stopped hundreds of horses from suffering and dying in the cruel horse racing industry. 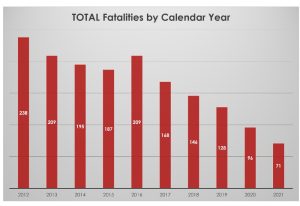 A post-mortem report for 2019-2020, the year for which data was most recently available, indicated that 72 percent of the horses who died in that time period were killed during or immediately following racing or training — deaths that could easily have been prevented by a horse racing ban.

The post-mortem study also reported that 79 percent of the killed horses were between 2 and 4 years old – and that approximately a quarter of the fatalities were horses 2 years or younger.

Lady Freethinker analyzed 200 complaints filed by the CHRB against industry licensees from January 2020 through May 2022 to see the impact of the touted 2019 reforms. That analysis showed at least 127 individual horses involved in complaint activities, including horses whose trainers allegedly tried to race them while injured, sick or vet-ordered to rest while recovering from medical treatments, according to the complaints.

In California, numerous horses who finished first in their races, or among the top finishers, at state-sanctioned tracks later were disqualified after testing positive for illegally administered substances.

In the last two years, the CHRB has issued at least 67 penalties involving drugged horse violations, most of which the organization attached to “4/c” penalties, in which trainers face fines of $500 to $1,000 for a first offense. The complaints involved 59 horses, six of whom tested positive for substances multiple times within the limited time frame, at the hands of 48 trainers — including 13 trainers who were repeat offenders.

Substances like these can be legally administered when prescribed by a licensed veterinarian as a preventative or as a treatment for existing conditions; however, trainers aren’t allowed to administer them without a vet’s consent. The most common substances found in horses at the time of their deaths were Phenylbutazone, frequently used to treat lameness in horses; Methocarbamol, commonly used in performance horses to treat skeletal muscle disorders; and Dexamethasone, which commonly treats serious musculoskeletal inflammations – all of which underscore the painful reality of racing for the horses involved.

Industry participants also have been cited for violence against their horses, including excessively whipping them with crops — sometimes more than 10 consecutive times, in stark violation of the oversight board’s rules — as well as criminal behavior against other humans.

The complaints reveal violations for a sexual assault, disorderly conduct, physical altercations, other aggressive behavior, a high speed car race, verbal attacks on veterinary staff, drug use (methamphetamine and marijuana) and performing their duties while under the influence of alcohol. 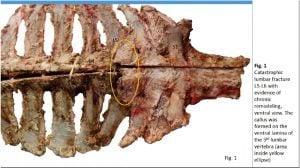 California Should Want No Part in Horse Racing

Despite California’s horse racing being a profitable industry – with generated revenue reportedly topping $2 billion annually, meaning millions of dollars for the state – there is significant, growing opposition to the “sport.”

A Reuters/Ipsos poll, conducted in 2019 across the United States, found that  62 percent of respondents had a “less favorable” opinion of horse racing, while a Quinipiac poll of California voters reported that only 19 percent of voters favored horse racing.

There are even calls for reform within the industry, with Lisa Lazarus, the CEO of the Horse Racing Integrity and Safety Authority (HISA), recently telling Reuters, “It would be really hard for someone to say that if horse racing doesn’t reform that it can continue the way it is. I don’t think it can.”

It’s clear from this year’s mounting death tolls that horses will continue to suffer and die until California bans horse racing.

For those interested in learning more about the innocent horses who have died so far this year, please see Lady Freethinker’s supplemental report. Please be advised this report contains graphic photos.

Then voice your opposition to this cruel, inhumane industry that masquerades as a “sport” by signing our petition urging California to officially ban all horse racing, and share it with your friends and family. 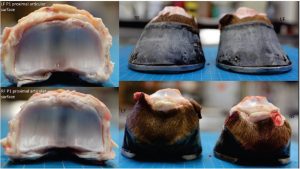