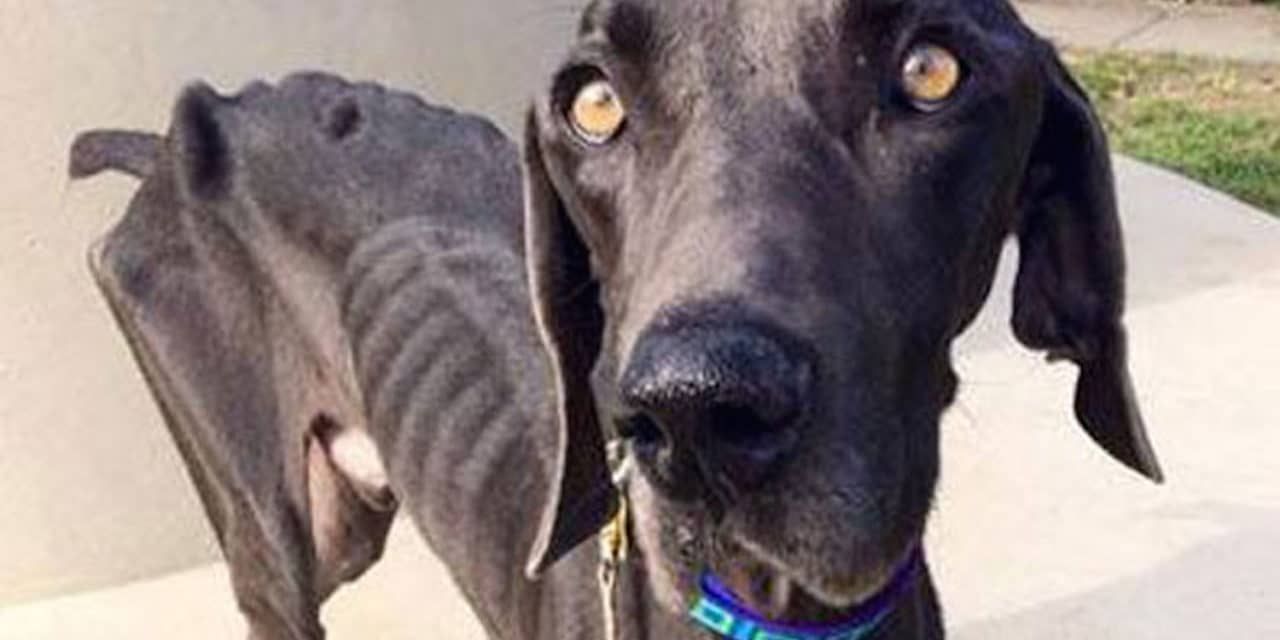 Alex’s bones were clearly visible beneath his thin black coat of fur. He was 2 years old but only weighed 40 pounds. He hadn’t had a good meal in a long time and x-rays showed he had been surviving on of rocks and twigs. If he didn’t get help soon, it looked like he might not make it.

Southern Animal Foundation to the rescue

After just a few days of loving care, things were already improving. Almost a week with Southern Animal Foundation and he’d gained 8 pounds. In their Facebook update, the foundation posted:

Making small progress every day. Alex doesn’t know a stranger, and loves to be out on walks. His appetite is great and he loves his new toys he’s been receiving. Alex is one happy dog and he knows he’s been saved.

Alex had a lot of health problems, but he fought and survived

Still, it wasn’t an easy recovery. Alex had heartworm, which couldn’t be treated until he gained more weight, and had to have emergency surgery when his stomach flipped. Thankfully, though, he pulled through. It probably helped knowing he now had people who cared about him.

Although it was tough, Alex had a lot of love and support

After his surgery, Alex got a lot of pampering. He went on walks to take in the fresh air and meet the passersby. His caretakers at the foundation thought the “positive energy” was good for him:

Alex isn’t sure what all the fuss is about, but he’s enjoying the attention he’s getting when he’s out for a walk. He’s become a little bit of a local celebrity! People say hello to him when he goes out for a walk, honk their horns & give him a thumbs up!

Alex got a lot of other little luxuries, too, all of which made life seem more normal and safe. He got an orthopedic bed and a name tag, and got to play with a lot of fun toys.

To help Alex, the foundation created the hashtag #savealex and asked for donations.

Alex got better and started looking for a forever home

After about a month, Alex was up to about 62 pounds and almost ready to go to a foster home. He even met a “potential little sister.” According to the foundation, they “hit it off right away.”

In the meantime, Alex was content to go on walks with his friends at the foundation, go to the park, and of course, play ball. Life was certainly looking up.

By December, two months after the foundation had picked Alex up, the kind woman with the cute Weimaraners decided to foster Alex. By then, he was 68 pounds. He still had to finish his heartworm treatment, but he’d made it through the worst. If everything went well with his foster mom, he’d even have a place to call his home pretty soon.

Of course, who couldn’t love Alex? He seemed to get along really well with his new brothers and sisters.

After a few months with his foster family, they decided to adopt him. It looks like they couldn’t be happier!

It’s amazing what care and love can do. With a little help and a lot of hugs, Alex made an incredible transition, transforming into the wholly formed, healthy, happy dog he was meant to be.