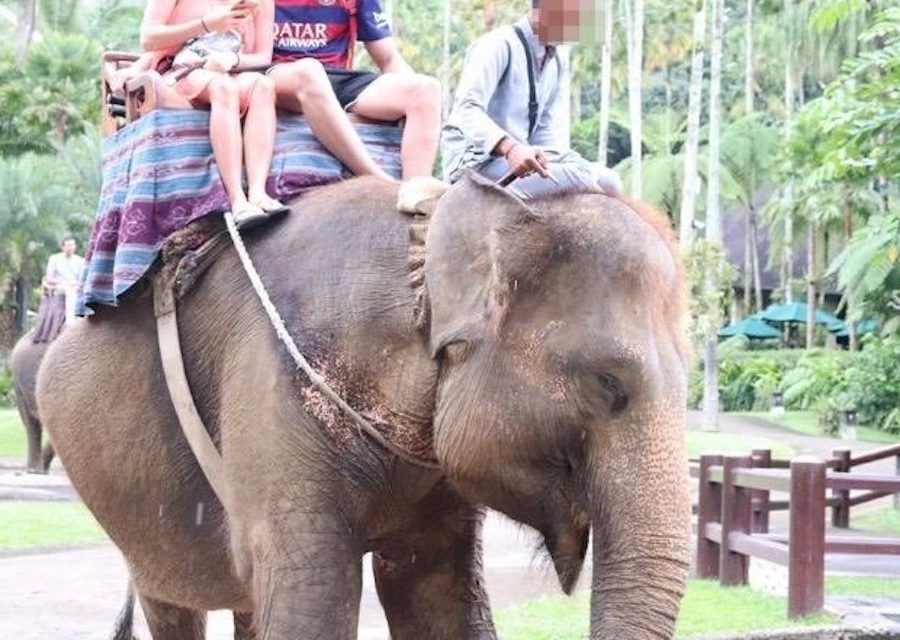 Captive elephants exploited in the tourism industry suffer horrifically — including being separated from their families, kept on chains that can cut into their soft flesh, and beaten with sharp bull hooks that leave vicious wounds.

In 2016, TripAdvisor announced they’d no longer sell tickets to tourism experiences where people come into physical contact with captive wild animals or endangered species, which included a ban on elephant rides. This was a welcome, compassionate decision for which we commend the company. However, new research from Lady Freethinker reveals that the company is allowing customers to book cruel venues like Mason Elephant Lodge through 3rd party links on its site, and that booking those accommodations can sometimes include the very experiences that violate TripAdvisor’s current policy.

As just one example, Mason Elephant Lodge has a room option where booking the accommodation includes a free elephant ride — along with hands-on elephant bathing and petting.

It’s also no secret that guests who book the Lodge do so most often to visit the nearby Mason Elephant Park, whose abusive and exploitive history is well documented — including by Lady Freethinker (LFT).

Besides being cruel and inhumane, forcing elephants into such close proximity with humans also is dangerous. At a roadside attraction in Thailand, a tourist was killed by an elephant while trying to feed one. In another tragic instance, an elephant forced to give rides at a National Park in Zimbabwe crushed his handler to death.

As long as elephants and other wild animals are exploited for “entertainment,” they will continue to suffer.

And as long as TripAdvisor continues to facilitate bookings to cruel venues that offer exploitative experiences tucked inside their pricing packages, the company will be in violation of its own stated commitment to not profit from animals’ suffering.