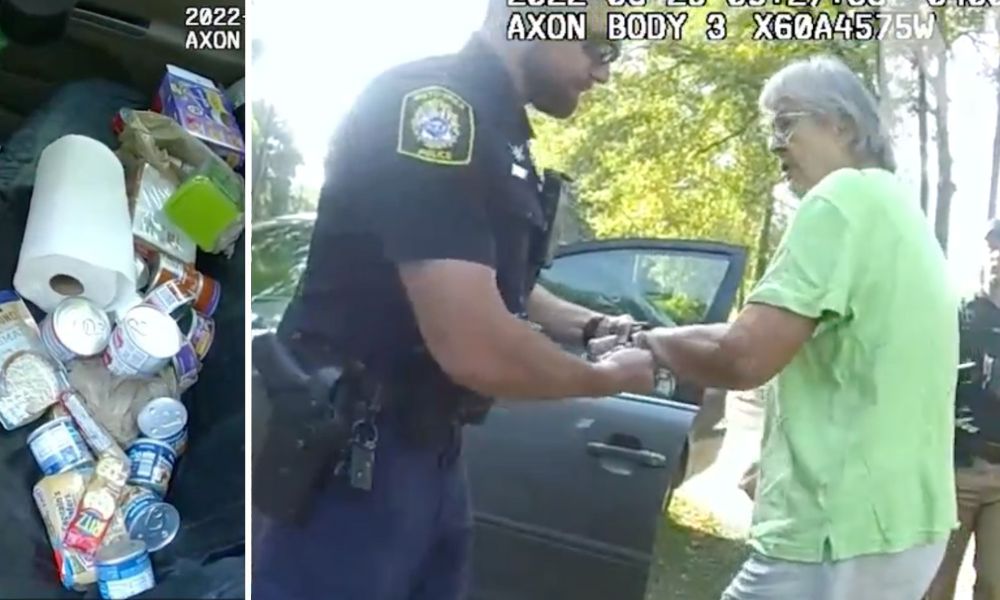 UPDATE (11/8/2022): Trials in Wetumpka Municipal Court for Mary Alston and Beverly Roberts, who are facing misdemeanor charges for feeding stray cats, have been delayed to Dec. 13. City prosecuting attorney Kenny James has recused himself, citing a conflict of interest. The women are represented by attorneys Terry Luck and Bill Shashy, according to news reports. We’ll keep watching this case. — Lady Freethinker Staff

Two women have been arrested, jailed, and criminally charged for feeding and trying to trap feral cats on public land, with the intent of reducing the community’s stray cat population in Wetumpka, Alabama.

WATCH: You can watch the body camera footage here.

Wetumpka police body camera footage shows three officers approaching Mary Alston, 60, and Beverly Roberts — an 84 year old, disabled veteran who served 20 years in the U.S. Army — as the two women sit in their cars on a vacant lot owned by Elmore County and prepare to feed and trap feral cats nearby.

One officer tells the women they have to leave the area, because “the city does not want anybody feeding the animals around here” and creating a nuisance. Alston responds that she has set a trap to catch and remove the cats so that they don’t become a nuisance. The officers then tell the women that if they don’t leave the area, they’ll be arrested for trespassing and taken to jail.

Roberts, the 84-year-old, asks officers “This is what you’re wasting city gas on?” and tries to give her car keys to Alston, at which point the officer says, “It’s going to get ugly if you don’t stop.”

The body camera footage, which was provided to The Montgomery Advertiser by the womens’ attorneys, then shows an officer dragging Alston out of her car by the arm and handcuffing her behind her back, while telling her she wasn’t listening “fast enough,” and that “You wanted to keep talking so now you’re going to jail.”

The video shows Roberts — who also has her arms pulled and handcuffed behind her — trying to enter a police vehicle before telling officers that her body isn’t able to move that way with her hands restrained behind her back.

An officer can be heard telling another officer that they almost tased one of the women.

“There was no reason for any of this to happen,” Luck told news. “Beverly and Mary were actually helping the city out. By getting the cats spayed or neutered, they were helping to control the population of the feral cats.”

Both women spent several hours in the Elmore County Jail, where Roberts reportedly passed out because she was so upset, the Tuscaloosa News reported.

“I don’t know how anyone could see starving animals and not want to help,” said Roberts, whom news has reported is 5’4” and weighs 130 pounds.

Wetumpka Police Chief Greg Benton said that the arrests and the officers’ treatment of the women was “within policy” – which means that policy needs to change.

The police’s official statement about the incident starts, “When Officer Crumpton made contact with the occupants of the vehicle, it was found that both suspects were feeding and attempting to trap stray cats.”

Luck has alleged that nothing in local or state law bars people from feeding cats.

Trapping, spaying and neutering, and rehoming or releasing (TNR) stray cats is an act of compassion — not a crime.

More than 91 cities in the United States officially condone TNR as an animal control strategy — and it’s unconscionable that the city of Wetumpka, Alabama, would rather jail compassionate people than form collaborative, working partnerships with them for the good of both cats and the surrounding community.

Sign our petition urging the Wetumpka Municipal Court to dismiss these frivolous charges, and for the Wetumpka Police Department to thoroughly investigate the inappropriate use of force in this situation.