Hundreds of Feral Cats in Hawaii are Now Living the Dream 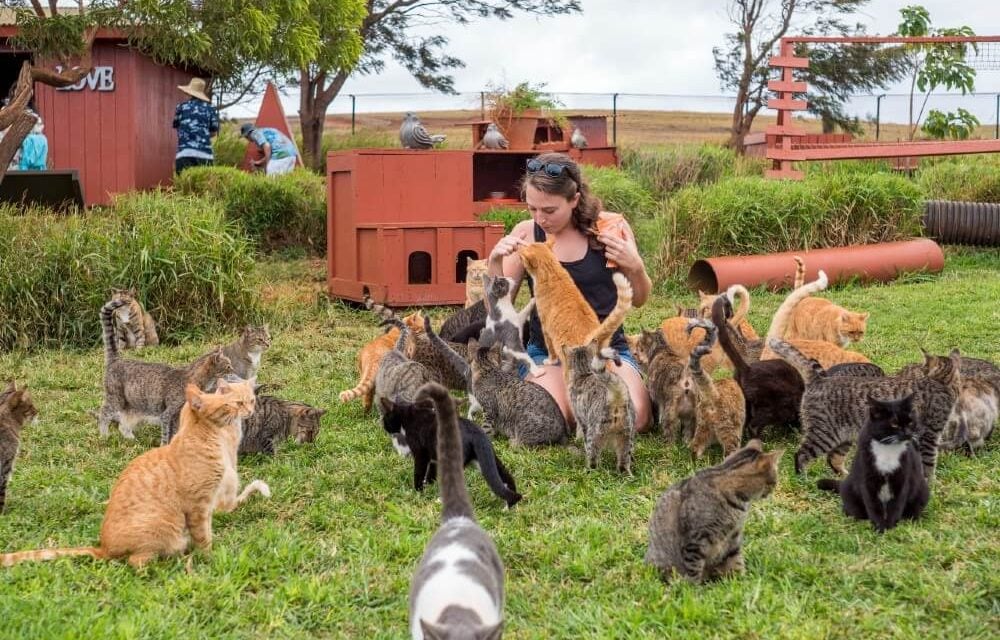 More than 600 formerly feral cats are now living out their best lives on a piece of “purradise” on Hawaii’s remote Lanai Island, thanks to the vision of a caring rescuer and a team of dedicated caregivers who took over her legacy.

The Lanai Cat Sanctuary, a 3.5 acre fenced facility, is accessible only via ferry or direct flight into the tiny Lanai airport. From there, a short drive down a dirt road to a rock will take visitors to the free admission grounds and their feline denizens.

The island itself has running water but no electricity, one gas station, no traffic lights, and a population of 3,000. All supplies have to be barged or flown in.

The remote location was only one of the challenges facing rescuers who set out to save both the hundreds of feral cats accumulating on the island, and the rare Hawaiian birds on which they sometimes preyed to survive.

There were no veterinarians on Lanai. There weren’t any rescue groups. The innovators also had to work to change the hearts and minds of people – including conservationists – who told them the idea of starting a sanctuary for feral cats was unsustainable, said the sanctuary’s Executive Director Keoni Vaughn.

“It took time,” he said. “But we would never accomplish anything if we didn’t try.”

The sanctuary’s founder Kathy Carroll started out in 2004 with 25 cats, $10,000, and a converted horse corral. The original crew started out with a focus on Trap, Neuter, and Release (TNR). But bird lovers in the area quickly raised an alarm, since this meant the cats would be free to prey on the many beautiful species of rare Hawaiian birds, including the Ua’u, or Hawaiian Petrel.

Rather than cave to pressure or a standard protocol of some conservation organizations to humanely “euthanize” the animals – which Vaughn said is frequently a gunshot to the head – the sanctuary team launched the idea of the permanent, enclosed sanctuary.

“I believe we created this problem in Hawaii by being irresponsible human beings who let out cats who weren’t spayed or neutered, so we have a responsibility to fix it,” Vaughn told Lady Freethinker. “We didn’t want to pick a side between birds and cats.”

The sanctuary moved to its present location in 2009. Since then, Vaughn, a native Hawaiian whose background includes leadership roles in animal welfare and cruelty investigations with the Hawaiian Humane Society, has seen the sanctuary through several expansions, to the about 665 resident cats currently on site.

“It’s so much easier to say we can’t do something, but my question is always, ‘Why can’t we?” Vaughn said. “We owe it to the cats and the birds.”

Vaughn also ushered in medical advancements, including flying a veterinarian out monthly so that potential adopters wouldn’t have to go through the arduous task of getting to the island, taking a 45-minute ferry from the harbor, renting a car and then driving to the nearest vet. Instead, they can skip the vet visit and head home with their new feline adoptee. Mobile vet clinics also can provide on-site care, including X-rays, sterilization and assessment services.

Each cat – or Lanai Lion, as they are affectionately called by staff – now has a name,  microchip, health record, and regular veterinary care. For socialization, they can choose to interact with visitors who will reward them with treats during the sanctuary’s open hours from 10 a.m. to 3 p.m. each day – or not.

“The cats know when the tourists arrive,” Vaughn said. “We give out small bags of treats, trying to train the cats to be more social, and over time they start to become part of the welcoming party. That’s one of the most rewarding parts, to see this fractious cat who came in and ended up crawling into someone’s lap.” 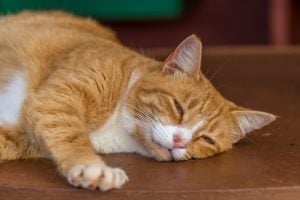 But he added that the sanctuary closes in the early afternoon each day to respect that some of the cats need that space.

“We care about the ferals as much as the friendly ones,” he said. “The cats need time to themselves. We tell visitors that if a cat is feral or fractious, let the cat be a cat.”

About 40 percent of the cats, whom Vaughn described as “truly feral” – including many of whom were born in the wild and have never interacted with human beings prior to their transfer to the sanctuary – become socialized to the point where they can be adopted out into loving forever homes, most often via adopters from the lower 48 states who visit and fall in love with a specific feline.

For the remaining 60 percent, the sanctuary will be their forever home.

In a remarkable twist of destiny, what started out as a “problem” on the island has now become a tourist attraction and source of revenue supporting local people and the local economy.

The sanctuary runs solely off donations, supported in large part by the average 15,000 visitors each year (pre-COVID), Vaughn said.

While the coexistence solutions of the Lanai Sanctuary were by no means easy, Vaughn said they are entirely possible for other communities grappling with feral cat overpopulation.

There might be 600 feral cats on Lanai Island, but there are up to 70 million just in the United States. Everyone can help save lives in Hawaii and around the world by always spaying, neutering, and adopting companion animals. 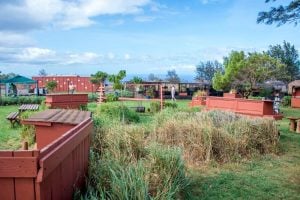