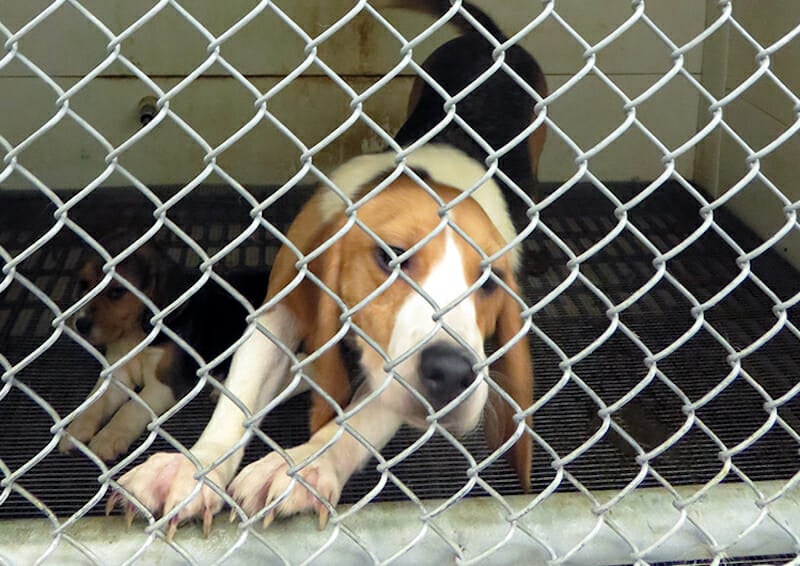 UPDATE (6/22/2022): The Cumberland facility announced its permanent closure in June, following an order by a federal judge that demanded an immediate halt to breeding operations, pending required improvements. We are grateful that no more dogs will have to suffer at this cruel facility, and we thank everyone who signed our petition!! Sadly, the order allowed for Envigo to sell at least 500 dogs to researchers to fulfill its existing contracts, which means these dogs likely are headed to additional misery. We will keep doing all we can to advocate against the use of sentient animals in horrific experiments. —Lady Freethinker Staff

This is just a snapshot of the 31 issues of noncompliance with the federal Animal Welfare Act (AWA) that Envigo, an Indianapolis-based company that breeds dogs for research for pharmaceuticals and biotechs, has racked up at a single facility since July 20, 2021, as cited by inspectors with the U.S. Department of Agriculture’s Animal and Plant Health Inspection Service (APHIS).

Over 300 puppy deaths were attributed to “unknown causes” during a July 2021 inspection, yet the inspector noted that facility staff had “not taken additional steps to determine the causes of death in order to prevent similar deaths of other puppies in the future,” according to the inspection reports.

Inspectors during that site visit also noted incomplete veterinary and inventory records — including for a newborn puppy left out of mortality records who was found in a drain under an enclosure, according to the inspection reports.

Preventable injuries and deaths also impacted a puppy found dead with his head stuck in a kennel door, nine dogs euthanized after neighboring dogs had bitten them through their kennel walls (regardless of the extent of their injuries), and a dog housed with nine other dogs whose death was reported as “evisceration” in the facility’s records, according to the inspection reports.

When questioned about some of these cases, facility staff reportedly told federal inspectors that they “had not previously identified” these and the other medical issues, according to the reports.

Despite these offenses, the facility is still up and running. The USDA has yet to even so much as temporarily suspend the company’s license, even though as a federal agency it has that authority. It is time for the USDA to take the evidence of widespread and chronic maltreatment, identified in its own reports, and shut down this facility.

Sign our petition urging APHIS’ Director of Animal Welfare Operations to start and follow through on proceedings to revoke Envigo’s research license and pursue the maximum fines possible for each violation of federal animal welfare law.