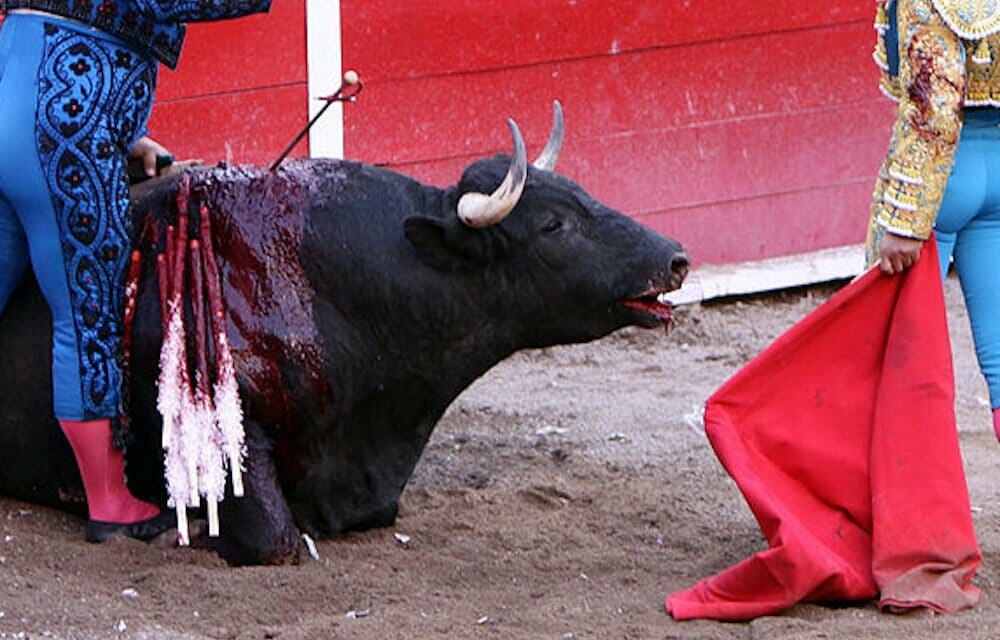 UPDATE (11/28/2022): French Members of Parliament (MP) were scheduled to vote for the first time on an official bill banning bull fighting in France, proposed by MP Aymeric Caron, in the National Assembly, but Caron withdrew the legislation after a majority of MPs voted against the bill during a preliminary debate, according to news reports. We’ll keep advocating for an end to this brutal practice. – Lady Freethinker Staff

Bulls sacrificed in front of thousands of spectators in the gruesome, medieval spectacle of bullfighting die slow and painful deaths. They’re paraded around packed arenas and repeatedly stabbed and mutilated with swords by toreros, who kill the unsuspecting animals while throngs cheer, who are sometimes even gored to death themselves.

While this brutal and dangerous blood sport could easily be outlawed in all of France — as it’s already banned in 90 percent of French territories — French lawmakers opted to exclude an end to bullfighting from a recently passed, wide-ranging animal welfare law that, among other things, permanently bans the use of wild animals for entertainment.

The French Government already recognizes bullfighting as animal abuse. Its criminal code includes bullfighting with other acts against animals that the government deems “serious abuse” and an “act of cruelty” towards animals held in captivity (article 521 -1).

But a legal loophole — upheld in the new legislation — allows bullfighting to continue in places where “an uninterrupted local tradition can be invoked.”  That focus on “tradition” — and one which only began 150 years ago — disguises the extreme cruelty inherent in bullfighting.

This deadly loophole is responsible for the merciless killing of more than 1,000 bulls in France every year — a “tradition” that 80 percent of French citizens polled in one study do not support.

It is time for France to stand up for the rights of all animals and end the needless torture of bulls — as well as stop preventable deaths and injuries to people.

Sign this petition urging French President Emmanuel Macron  and French Ambassador to the United States Philippe Etienne to call for a complete and permanent ban on bullfighting in France and to end this cruel bloodsport for good.