SIGN: Justice for Billy, Kitten with Testicles Savagely Cut Off with Scissors 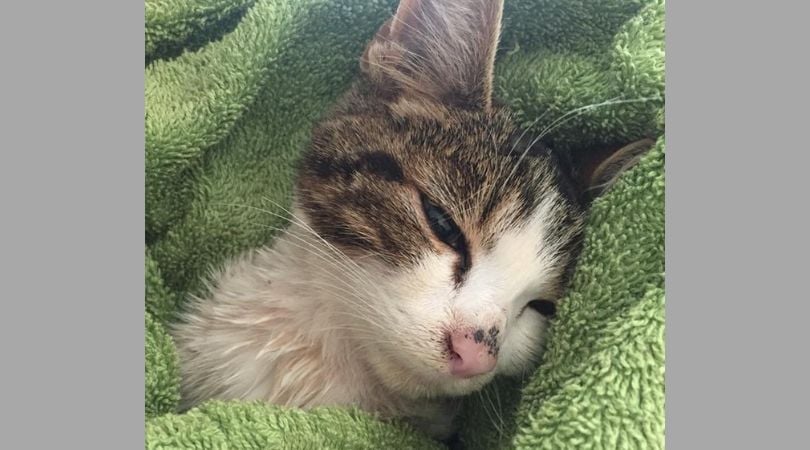 UPDATE (4/15/2021): Unfortunately, we have not been able to get a straight answer about the investigation into Billy’s case.

News reports from the time said that the RSPCA was investigating, but an RSCPA spokesperson told Lady Freethinker that the police were conducting the investigation.

“I’ve just looked into this and I believe this was investigated by the police, not ourselves,” the spokesperson said.

Inquiries to the Lancashire Police met with a similar wall, with an officer telling Lady Freethinker that the department does not release information in cruelty cases and otherwise would not look into the case without the incident number, despite ongoing correspondence related to the case since 2018, links to media coverage of the incident, and also as much information about the site of the crime as we could provide.

“Due to data protection we would not be able to disclose any information for reports we have investigated and with out a log number it would be impossible to find anyway,” was the response, in full, to Lady Freethinker’s most recent inquiry.

We want to thank the more than 31,700 people who signed our petition demanding justice for Billy. We hope this innocent kitten is now at peace and we will continue to fight for accountability for animal abusers worldwide.

UPDATE (10/8/18): It is with a heavy heart that we share the devastating news that after a tremendous fight by Billy, his supporters, and the team taking care of him, Billy had to be euthanized after developing severe bowel problems. Billy fought a hard fight, and we will do the same for Billy. We will now work even harder to urge law enforcement to find and prosecute Billy’s killer, so his death is not in vain.

In what rescuers are calling the worst case of animal abuse they have seen in 16 years of cat rescue, a half-starved kitten had his testicles brutally hacked off with scissors before being left in a box to die, covered in his own urine and feces.

The 13-week-old kitten — named Billy by rescuers — was found dying in a box in a park in Preston, Lancashire, UK, by a dog walker this week. He was taken to Blackpool Cats in Care rescue.

Vets say he has only a 50 percent chance of surviving his shocking wounds. His mutilated testicles are seriously infected and he has a broken pelvis, He needs an operation to repair the damage, but is still too emaciated and weak to undergo surgery.

Whoever did this to him also used scissors to roughly cut the fur from his head and back. It is clear from Billy’s condition that he was neglected for quite some time before being dumped to die. This innocent kitten is still fighting for his life, while no leads have been reported in the investigation of this horrific crime.

Sign this petition urging the Lancashire Constabulary to use all their resources to find the perpetrator of this barbaric crime and prosecute them to the fullest extent of the law, ensuring justice is served for Billy.