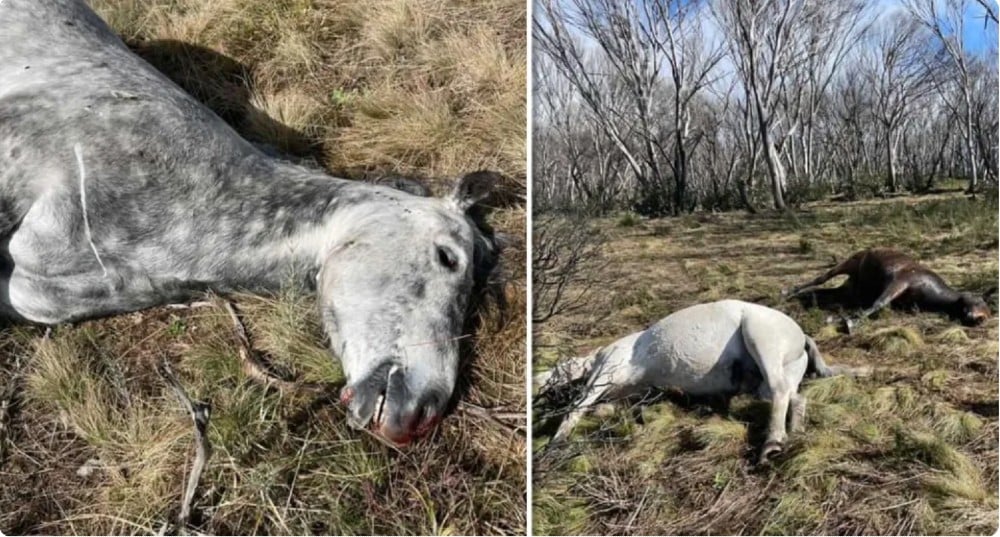 UPDATE (11/4/2022): VICE has reported the brumby cull was government sanctioned. We’re reaching out to the parties involved for more information and will report back if we receive any updates. — Lady Freethinker Staff

Eleven wild horses who likely died slow and painful deaths lay riddled with gunshots to their heads and bodies before two photographers found their bloody corpses in the Kosciuszko National Park in Australia.

Michelle and Ian Brown had followed and documented the beloved horses — called brumbies in Australia — for five years, along with their Facebook page’s more than 73,000 followers.  The couple said the scene they found in the national park was “horrific” and “devastating.”

“We’ve been literally photographing these horses for four or five years,” Michelle told Yahoo News! Australia. “We’ve watched them grow up since they were babies… we’ve followed them every step of the way.”


Victims included three heavily pregnant mares who reportedly lost their babies from being shot to death, and adult wild horses who left long trails of blood that “show the horses were left to die slowly,” according to statements made by the Animal Justice Party NSW.

Horrifically, the horses reportedly were killed within a wild horse retention area, which Animal Justice Party Member of Parliament Emma Hurst has said is an area where they should have been protected, while National MP Peter Cochran has called the killing “a professional ambush.”

The NSW Environment Minister has admitted that “wild horse control” measures — the details of which he said would not be publicly released — were taking place in the park according to a controversial NSW National Park Service plan approved in 2021, according to the Daily Mail.

While that plan states that trapping and rehoming wild horses is priority, it also controversially allows for shooting horses to death.

The plan also aims to reduce the estimated 14,800 wild horses in the park down to 3,000 by June 2027, and to confine those horses to an estimated 32 percent of the national park, according to news reports.

Wild horses are extraordinary animals who love their families and can travel 10 – 20 miles a day at speeds up to 30 mph. They don’t deserve to die painful and prolonged deaths. The individual(s) responsible for brutally massacring this entire herd must be found and held accountable, and government-sanctioned culling of wild horses must stop.

Sign our petition demanding a thorough investigation and full accountability for the individual(s) involved in killing these 11 innocent horses, an end to government-sanctioned wild horse “management” culls, and more land designated as protected wild horse habitat within the park.