SIGN: Justice for Tiger Savagely Beaten to Death by Mob 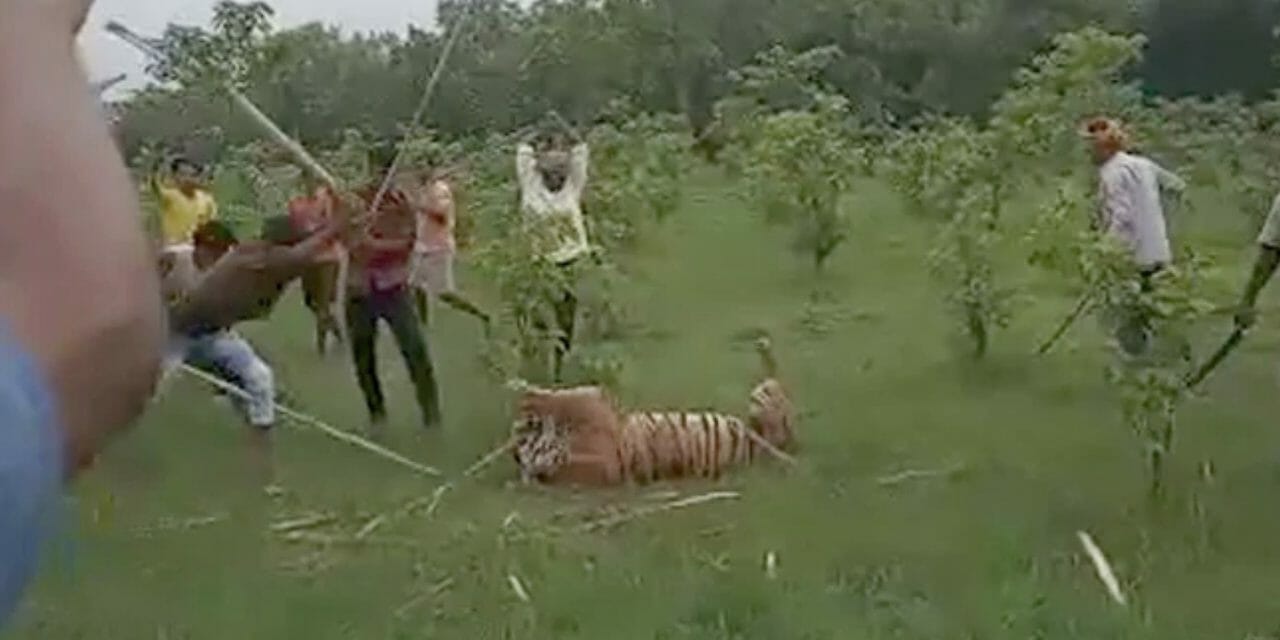 UPDATE (6/1/2022): We sent our petition, signed by more than 28,000 people, over to Forest Officer Naveen Khandelwal. Thank you to everyone who signed our petition! We have since learned that WWF-India and Global Tiger Forum, the Uttar Pradesh Forest Department are working together to redevelop a conflict-response mechanisms in the Pilibhit region. Their key initiatives will include the establishment of mobile response teams, embedding bagh-rakshaks within communities who might act as first respondents and prevent crowds from building, improved monitoring of farmland wildlife, strengthened inter-agency coordination and awareness campaigns that emphasize human safety.  We’ll keep doing all we can to advocate for animals. —Lady Freethinker Staff

A female tiger died a gruesome death at the hands of a mob of more than 40 villagers armed with spears and sticks in the Indian state of Uttar Pradesh last week.

Mobile phone video captured the horrific attack by dozens of men in Pilibhit screaming and shouting as they relentlessly pummeled the tiger’s motionless body to the point of death, shattering her ribs as blood poured from her gaping wounds.

When police and forest officials arrived, they were forced to retreat because the locals began attacking them. They were unable to save the tigress, who died from shock due to blood loss, broken bones and trauma.

Disturbingly, the tigress was attacked inside the protected Pilibhit Tiger Reserve, despite multiple warnings to the villagers. A report from forestry officials states that when a villager approached her in the morning inside the reserve, she attacked him. As revenge, the mob stormed the reserve and murdered her.

An investigation is underway. Four people have been arrested.

This brutal beating of a critically endangered tiger in a supposedly safe haven shows that India has a long way to go in protecting this species. News agency IANS reports as many as 16 tigers and 3 leopards killed within the jungle and its surroundings since 2012.

Please sign this petition urging Forest Officer for the Pilibhit Tiger Reserve, Naveen Khandelwal, to ensure there is a thorough investigation of this senseless beating and increase efforts to effectively educate locals to prevent future attacks on wildlife.