SIGN: Justice for Smuggled Lion Cub Who Lost Both Eyes 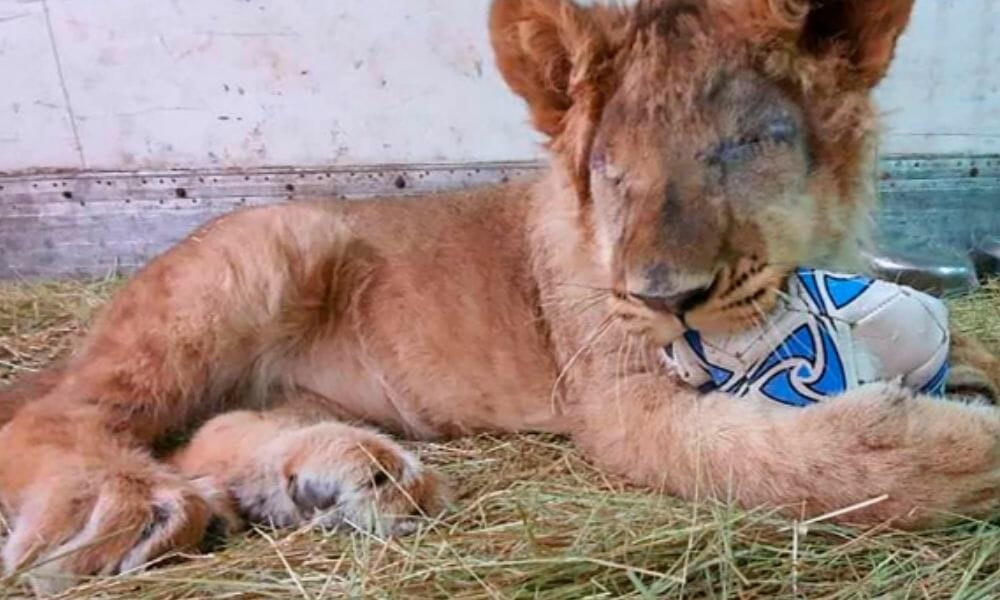 UPDATE (7/25/2022): We sent our petition, signed now by almost 40,000 people, to the Russian Ministry of Internal Affairs. Unfortunately, despite multiple checks back, we were unable to obtain any additional information about this case. We will continue to do all we can for animals everywhere! —Lady Freethinker Staff

Snatched from his mother almost immediately after his birth, a helpless lion cub named Grom is now blind after smugglers forced him into a tiny box with no food or water and crammed him into the luggage compartment of a long-haul bus in Russia, according to the Sun.

Police discovered the sick and dying lion cub in deplorable conditions with severely inflamed and ruptured corneas. Several surgeries failed to save Grom’s eyesight, and he ultimately lost both his eyes, Daily Mail reported.

The baby lion is frustrated and doesn’t understand why he can’t see, said Nikolay Dovgalyuk, who initially took care of the cub after his rescue.

Grom now needs lifelong care, and his future remains uncertain. He’s also just one of the victims of the illegal animal trafficking trade that caters to a demand for exotic pets, according to officials.

Police have not yet identified the criminals who cruelly caged and transported Grom. Sign this petition urging Russia’s Ministry of Internal Affairs to use all available resources to fully investigate this heartbreaking crime and bring Grom’s traffickers to justice before more innocent animals are harmed or killed.