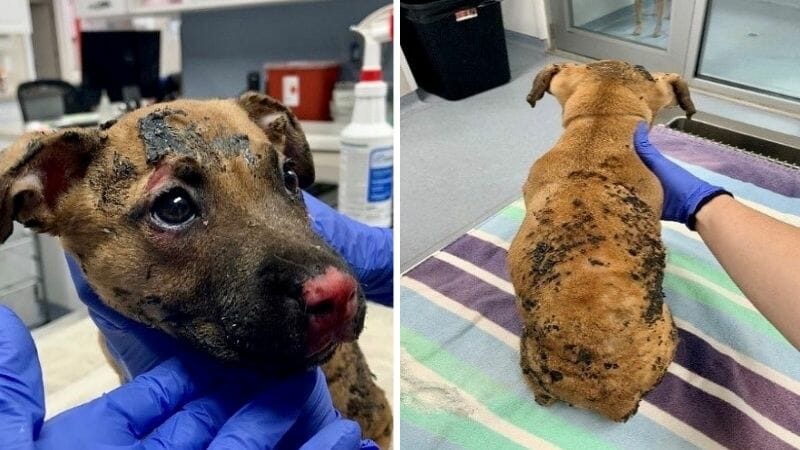 UPDATE (3/25/2022): In July 2021, Mr. Ra’shae Syrtaj Jermaine was sentenced to three years in prison and ordered not to have animals in his home for 20 years, according to ABC7. He pleaded guilty to three felonies for setting the puppy, Korra, on fire. He claimed he did not know how else to get rid of the puppy. Luckily, Korra healed and was adopted by a member of the Animal Emergency staff. She is happy and healthy. We thank everyone who has signed the petition and we will continue to advocate for innocent animals. — Lady Freethinker Staff

Trapped in a cage and set on fire, a defenseless puppy named Korra was abandoned to die. Firefighters found her running around a park in Ohio with melted plastic stuck to her head and burns on her face and paws, according to the Columbus Division of Fire.

Burning underneath a nearby tree was the plastic crate that nearly became the dog’s death chamber.

The firefighters transported Korra to the Diley Hill Animal Medical Center, where she received lifesaving treatment for her horrific burns.

“We see a lot of bad things on a daily basis, but this has cut a lot of our people to the core,” said investigator Mike DeFrancisco, who described the scene as “heart-wrenching” and “sickening.”

Police arrested and charged suspect Ra’shae Syrtaj Jermaine with a fifth-degree felony, after he reportedly confessed to the crime, according to Fox 8.

Animal torture is a sign of severe mental disturbance, and can indicate future violence. Officials must take meaningful action before more animals — or humans — are harmed.

Sign this petition urging Ohio Attorney General Dave Yost to prosecute the perpetrator to the fullest extent of the law, including a life-long ban on keeping animals in his “care.”