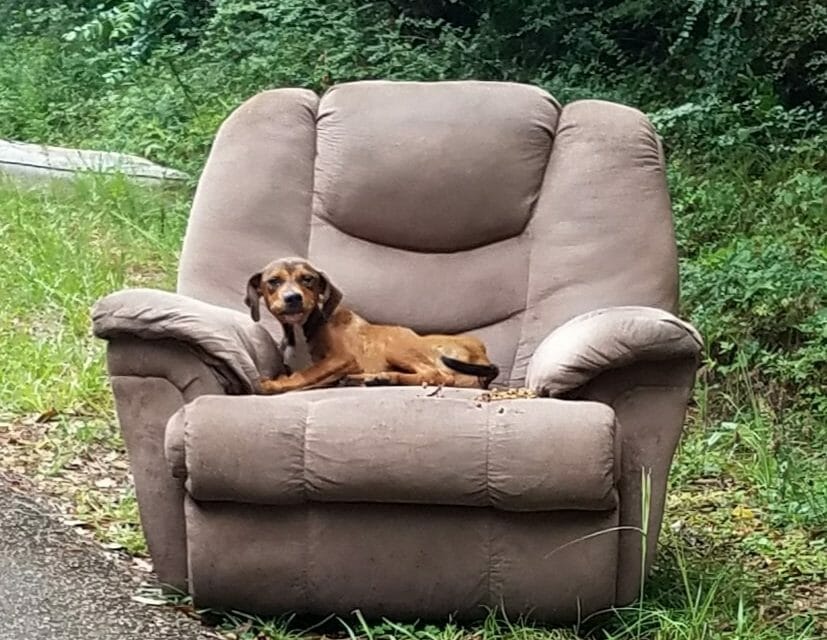 UPDATE (5/25/2022): Happy news! La-Z-Boy Gaston has been adopted and is currently thriving with his new family! Dave Trammell and Sommer Guy drove over 15 hours to meet and potentially adopt La-Z-Boy Gaston after hearing his story, according to Today. He has adjusted to his new home and especially with the couple’s other dog Penelope. Meanwhile, we haven’t been able to get any additional information on whomever committed this horrific act of abandonment. We’ll keep doing all we can for animals everywhere. — Lady Freethinker Staff

A four-month-old puppy was discovered starving on a remote Mississippi roadside, abandoned like trash along with a battered recliner and an old TV.

For several days, the scared but loyal pup waited patiently in the chair for his guardian’s return. His ribs were protruding when he was rescued by animal control officer Sharon Norton of the nearby Brookhaven Police Department.

The malnourished and terrified puppy didn’t want to disobey the cruel person who had tossed him aside like garbage and was hesitant to leave the recliner at first. Norton eventually coaxed him away from the lounger and took him for much-needed medical care.

His new name is La-Z-Boy Gatson, and thankfully he’s expected to recover. The pup is lucky someone spotted him along the secluded road while there was still time to save his life.

The heartless individual who abandoned La-Z-Boy Gatson is still at large,and must be held accountable for their crime. Sign this petition urging the Brookhaven Police Department to use all their resources to identify the person behind this cruel act and prosecute them to the fullest extent of the law, including a lifetime ban on ever having an animal in their care.