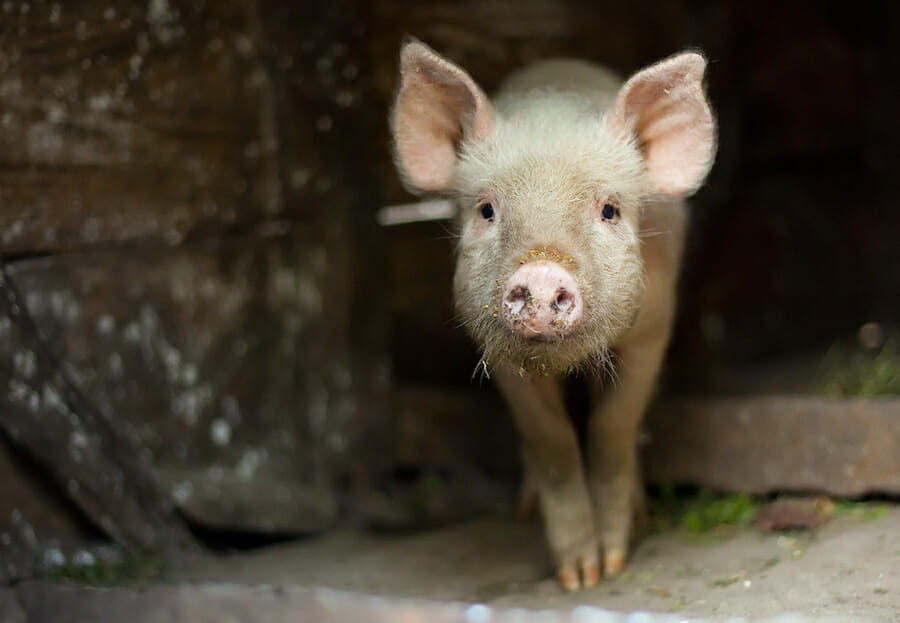 UPDATE (3/17/2022): Homer the pig is currently in private boarding and will be relocated as a permanent resident to the Enoch J. Donaldson Animal Sanctuary at Mt. Hermon upon completed construction of an additional enclosure, Louisiana Humane Society President Dana Nesbitt told LFT. Meanwhile,  Orelvis Otero Pinero and Onisley Bravo Fleites paid respective fines of $222.75 and $220.75; they were not given any probation as a part of their sentence, according to a First Parish Judicial Court clerk. We are disgusted at this sentencing but overjoyed that Homer will soon have a happy forever home on the horizon. You can read our full update story at Ladyfreethinker.org. –Lady Freethinker Staff

Bought only to be slaughtered in someone’s backyard for a Mother’s Day dinner in Kenner, LA, a defenseless pig struggled for his life, squealing out in pain as two men beat him in the head and neck with a broom handle, according to local police.

Terrified and hurt, the pig tried to escape as two pit bulls aggressively attacked him. Both dogs will now be put down — another disastrous consequence of their guardian’s irresponsible actions — according to officials.

A horrified neighbor, who overheard the pig yelling out for help, peered into the yard, saw the pig hog-tied and destined for death, and pleaded for the men to stop. The two men took the pig and their two dogs into the garage and out of sight, according to the witness, who promptly called the police.

Police found the pig bleeding with a puncture wound on his rear end, a cut on his back foot, and a ripped ear. They charged suspects Orelvis Otero Pinero and Onisley Bravo Fleites with aggravated animal cruelty.

This innocent pig deserves justice. Sign this petition urging Kenner City Attorney Edward S. Rapier, Jr. to show that cruelty to any animal will not be tolerated and prosecute the perpetrators to the fullest extent of the law.

As devastating as this incident is, millions of pigs suffer immense cruelty every day in U.S. factory farms. We must work to end the cruel factory farming system in the United States. Sign Lady Freethinker’s petition now.