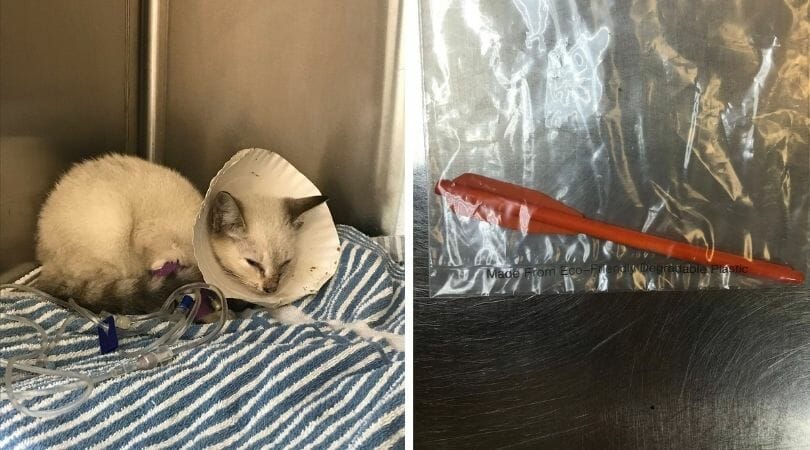 UPDATE (4/4/2022): Maid Marian has found a loving forever home, said Jen Tate of the St. Francis Society Animal Rescue.  Tate, who fostered the kitten while she was recuperating, said that the adopter also took home an outgoing companion kitten.

“I thought that was going to be a good match for Maid Marian, as a friend, to help give her confidence,” Tate told LFT.

On the criminal end of things, no one was ever connected to this horrific act of cruelty and the case has been closed, but can be re-opened if new information comes to light, a staff member with the Hillsborough Animal Control told LFT.

We are overjoyed that Maid Marian has a new friend and feline sister, and we will keep doing all we can to raise awareness about other stories like this! —Lady Freethinker Staff

A malnourished, 12-week-old kitten with an arrow lodged through her sinus cavity, tongue and neck struggled to survive after likely getting shot with a crossbow, according to Fox 13.

Barely able to swallow — and half the normal size of a kitten her age — Maid Marian was rushed to receive emergency surgery and medical treatment.

The six-inch arrow nearly hit her esophagus and jugular vein, which likely would’ve resulted in death, according to KIRO 7. Her physical and psychological injuries will take a long time to heal, and she will need special care before adoption is even considered.

Whoever shot this innocent kitten in the face must be brought to justice before any more animals are harmed or killed. Sign this petition urging Hillsborough County Animal Control to put all available resources into identifying and charging the individual(s) responsible for this horrifying act of cruelty.

This is an ongoing investigation. Anyone with information is urged to contact Hillsborough County Animal Control at 813-744-5660.