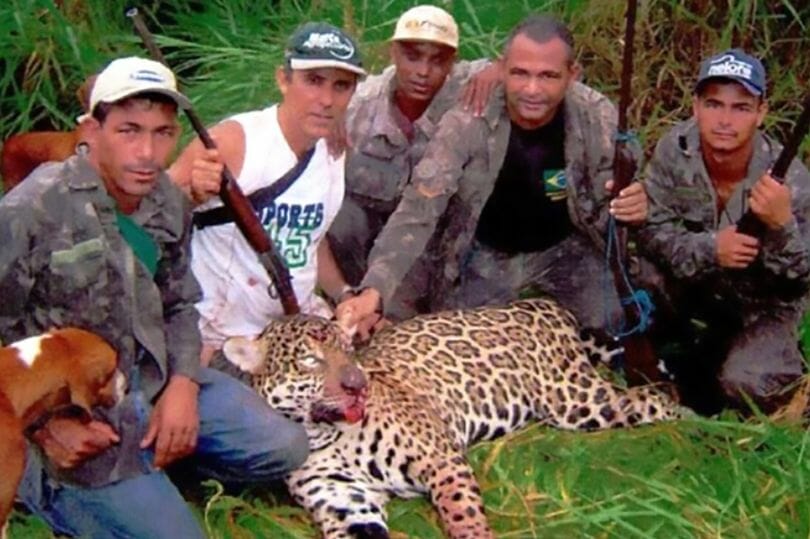 PETITION TARGET: Attorney of the Republic in Acre

Brazilian authorities have arrested seven men suspected of illegally slaughtering thousands of endangered animals in the state of Acre.

Several photos released by Brazil’s Federal Public Prosecutor’s Office show the gang posing with the body of a fully-grown jaguar as blood drips from its mouth. In another, a smiling hunter stands smiling proudly with a dead jaguar slung over his shoulders.

During a three-month-long investigation by authorities, the group hunted down and shot eight jaguars, ten collared peccaries, and two deer.

However, one of the suspects, a dentist named Temístocles Barbosa Freire, is accused of illegally hunting animals since 1987. Authorities say he is personally responsible for the murder of more than 1,000 jaguars since then.

Jaguars are listed on Appendix 1 of CITES and classified as near threatened by the IUCN. Conservationists estimate there are only 15,000 of these majestic cats left in the wild.

Prosecutors have charged the men with illegal hunting and using a firearm without a permit. They could face prison sentences and fines if found guilty.

Sign this petition urging the Attorney of the Republic in Acre to treat this case with the severity it deserves and prosecute these men to the fullest extent of the law, sending the message that murdering animals for fun is NOT acceptable.