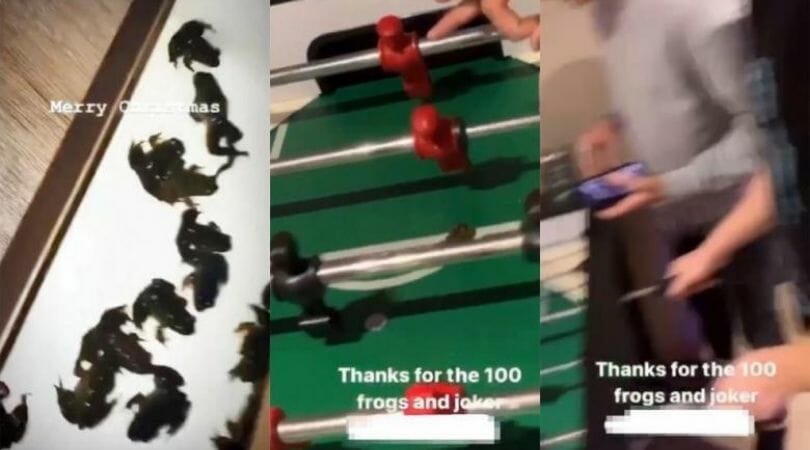 UPDATE (9/2/2021): Jaipal Singh Gill, executive director of the SPCA, told Lady Freethinker that those involved in the horrific instance of using live frogs as foosball targets have been identified, although their names have not been publicly released.

“All information we had gathered was passed to the authorities here in Singapore,” Gill said. “The case is still under investigation, and to our knowledge, there has been no final outcome yet.”

Gill also thanked the public for speaking up and encouraged those who come across any other horrific videos originating in Singapore to lodge a report with the SPCA at https://spca.org.sg/cruelty-welfare/.

We will continue to monitor this case.

In a disturbing act of animal cruelty captured on camera, a group of teens in Singapore reportedly put live frogs on a foosball table and pelted them with balls as they desperately tried to escape, according to The New Paper.

One clip that was uploaded to Instagram shows the youths opening a shoebox with over a dozen frogs inside, with the message “Merry Christmas” written across the screen. Another clip shows the adolescents shooting a ball straight into one frog, causing the amphibian to smack into the side of the table as he tried to run away.

“We didn’t know how to kill the frog as quickly as possible,” said one teen in an attempted justification, “and my friend thought that shooting it with the ball might be effective, so we did that.”

Authorities are investigating the shocking incident, which depicts a clear case of animal cruelty that is punishable by law, according to a statement from SPCA executive director Jaipal Singh Gill.

Whoever is responsible for deliberately causing pain and suffering to these innocent frogs must answer for their actions. Sign this petition urging the Singapore Animal and Veterinary Service to use all available resources to identify and charge the individuals involved.

This is an ongoing investigation. Anyone with information, including the identity of the individuals in the video, is urged to email the SPCA at [email protected].