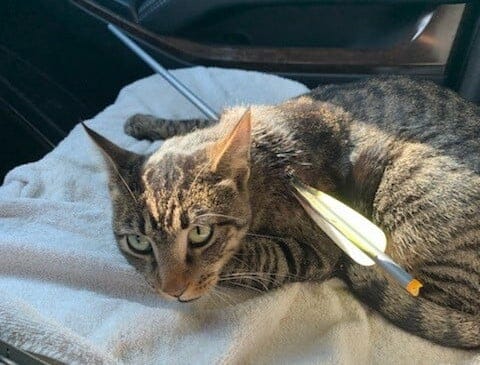 A cat named Elvis wailed helplessly in pain after an arrow pierced his shoulders, alerting a Wagoner County, Okla. resident to his dire situation.

The projectile impaled the defenseless feline, ripping through his skin and causing needless suffering, according to the Wagoner County Sheriff’s Office, whose officers rushed Elvis to emergency care. The arrow only narrowly missed his major organs.

Police canvassed the neighborhood and questioned local residents, but failed to identify a suspect in this disturbing case. Whoever cruelly shot an arrow into Elvis is still out there. They must be found and charged before more animals are harmed or killed.

Sign this petition urging the Wagoner County Sheriff’s Office to use all available resources to locate and arrest the person(s) responsible for this appalling act of animal abuse.

This is an ongoing investigation. Anyone with information is urged to call the Wagoner County Sheriff’s Office at 918-485-3124 or submit a tip online. You may remain anonymous. There is a $1,000 reward for information leading to an arrest and conviction.