SIGN: Justice for Elephants Chained and Beaten Until they ‘Scream in Agony’

Home » Animals » SIGN: Justice for Elephants Chained and Beaten Until they ‘Scream in Agony’By Carly Day 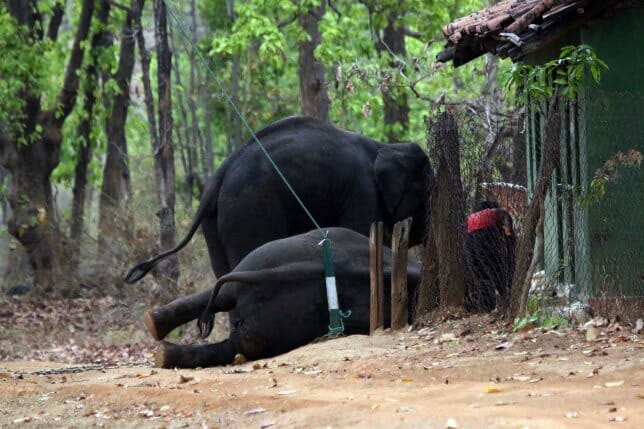 In Bandhavgarh National Park, India, terrified elephants are chained, beaten, and forced to carry up to six people at a time in the name of “ecotourism.” Emaciated elephants are repeatedly whipped with five-foot-long bamboo canes as they scream in agony and urinate on themselves out of distress.

Wildlife photographer Norman Watson witnessed two mahouts (elephant trainers) forcing an adult elephant to the ground using a sharp hook and ruthlessly beating the animal for ten minutes, only stopping when the man was too tired to continue the attack.

In another incident, two five-year-old elephants tried to escape a harsh beating by a mahout, but their legs were chained so tightly they could only hop and shuffle.

The elephants here are used for “elephant safaris.” As many as six tourists at once sit atop the animals as they trek through the reserve in search of the freely-roaming tigers.

The national park is an important conservation and ecotourism establishment for wild tigers in India — but it’s hell for elephants.

No animal deserves to be tortured and abused — whether in the name of conservation or entertainment.