SIGN: Justice for Elderly Beagle with Tumor Abandoned on Roadside to Die 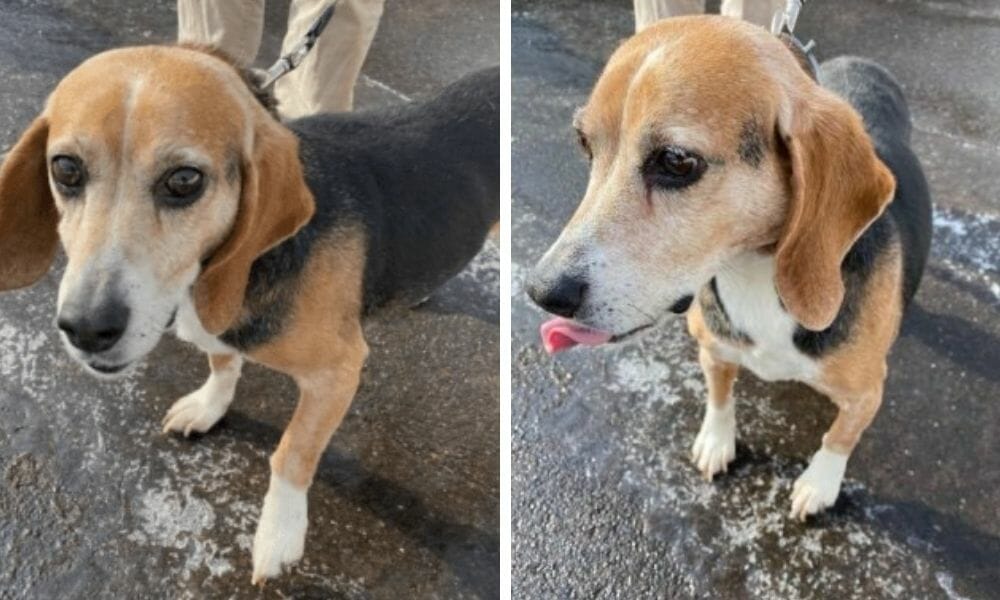 UPDATE (5/27/2021): An elderly beagle suffering from an untreated tumor and abandoned on the side of a road in Hamden, Conn. has a new name — Rosie — and a new home.

Hamden Animal Control Officer Chris Smith told Lady Freethinker that the scrappy senior found a wonderful new home on a farm, with two other dogs and a loving couple, shortly after the sad part of her story made headlines.

“They are calling her Rosie, and she’s having the time of her life,” Smith said.

A veterinary examination also showed that Rosie’s tumor turned out to be benign, Smith added.

Meanwhile, the police department followed through with leads into who abandoned her. But ultimately, they were not able to find the person who dumped her, and her case has been suspended unless new information comes to light.

“All we had to go on was this truck with a different colored tail,” Smith said. “We didn’t have any license plates. We checked the surveillance cameras in the area, but none were pointed in that direction. We’re at a stand still right now, but if more information comes through, and it always does, then we would look into it.”

He added, “I would love to find the person who did this. She’s such a sweet girl.”

We thank the more than 36,000 supporters who signed our petition demanding accountability for Rosie, and we are overjoyed that she has now found a loving forever home where she can receive the care and attention she deserves.

Left on a roadside to fend for herself in frigid winter weather, a starving elderly beagle suffering from a tumor watched her guardian drive away in Hamden, Conn.

A witness called the police after watching someone in a blue pick-up truck pull over and abandon the dog, who has a two-inch mass behind her shoulder. Emaciated and unkempt, the senior dog likely endured prolonged neglect before someone dumped her like trash.

Police have not yet identified the individual who committed this heartbreaking act and are hoping a member of the public comes forward with information.

Whoever denied this ailing dog the care and comfort she deserves, leaving her for dead on the side of the road, must answer for their actions.

Sign this petition urging the Hamden Police Department to use all available resources into identify and arrest the person responsible for this disturbing crime.

This is an ongoing investigation. Anyone with information is urged to call the Hamden Animal Control Department at (203) 230-4080.