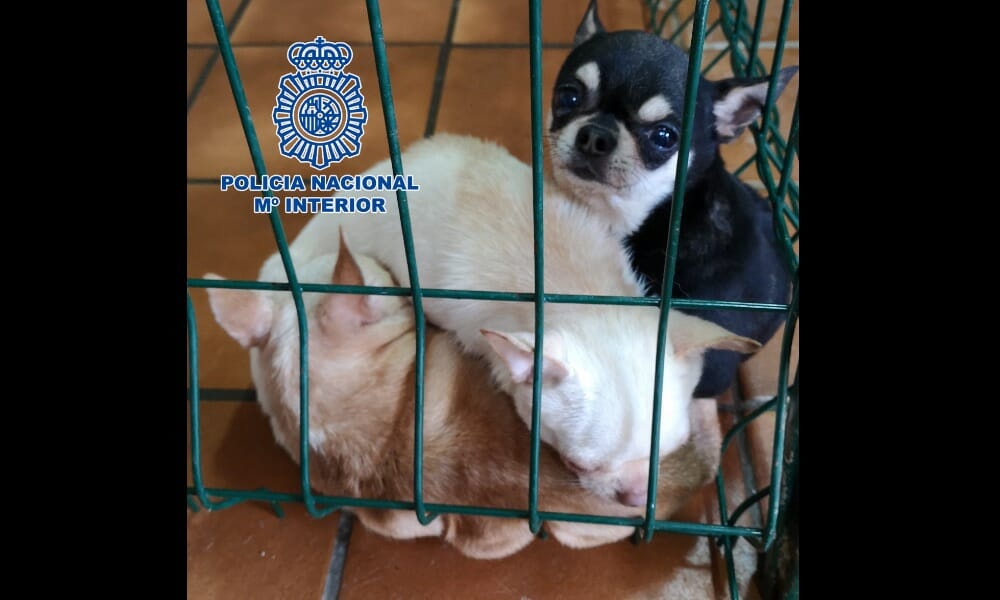 UPDATE (11/8/21): The leader of the network has been identified by authorities as Adolfo G., who was arrested along with his wife and two veterinarians, from Leganés and Madrid, who allegedly helped legitimize the operation by providing stamped certificates and fitting the dogs with identification chips,  with animal abuse charges pending, according to Reuters and other news reports.

Hundreds of dogs, including two dead puppies frozen and wrapped in newspaper, suffered in crowded, filthy conditions, unable to cry out for help because their vocal cords were painfully severed.

Found languishing in illegal kennels in the Spanish towns of Meco and Arganda del Rey in Madrid, the poor creatures lived in clandestine makeshift facilities, including a hidden basement area.

The Spanish National Police raided one house, initially rescuing 12 chihuahuas, as reported by EuroWeekly. Veterinary tests confirmed that several of the dogs’ vocal cords were cruelly cut, most likely to ensure neighbors wouldn’t hear them barking and discover the criminal establishment.

After searching other locations, authorities found over 250 more dogs.

Animal rescue organizations are attempting to rehabilitate the injured dogs, who constitute a mere portion of those raised in horrendous conditions over the decade-long operation, which profited to the tune of nearly two million euros.

People who disregard the law and animal welfare, especially on such a massive scale, must be held accountable for their actions. Recovery is not an option for the dogs who died at the hands of these cruel puppy breeders, but hope for justice remains. Please, sign this petition urging the Spanish Ambassador to call for full prosecution, and work to ensure that all guilty parties are banned from having animals for life.