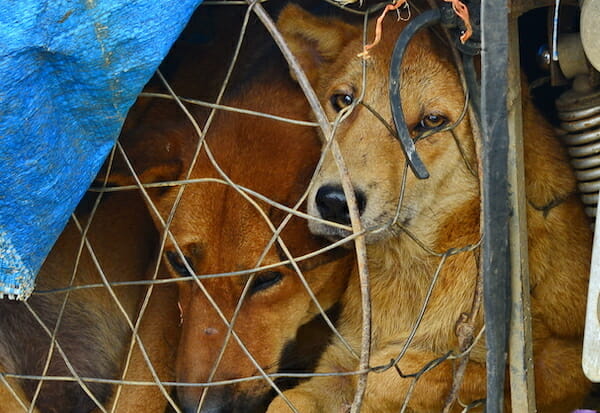 After traffic police stopped a passenger bus in the Nghe An province of Vietnam, an overwhelming stench alerted the officers to the horror of over 1,300 pounds of rotting dog and cat corpses packed into styrofoam boxes to be transported and sold in a Hanoi meat market, according to VN Express.

These innocent animals likely endured unimaginable suffering before being slaughtered and shipped off for human consumption. Sadly, there is no law banning the sale or transportation of dog and cat meat in Vietnam, but transporting goods from an unknown origin is illegal. The bus driver, Dinh Minh Hieu, failed to provide documentation for the shipment, and police are currently unsure about where it came from.

Dogs and cats are frequently trapped in small, barren wire cages, beaten to death, and burned or boiled alive for Vietnam’s cruel dog and cat meat trade. Languishing in slaughterhouses and live animal markets, these creatures are at risk of spreading deadly diseases and parasites, greatly endangering human lives.

Sign this petition urging Ambassador Ha Kim Ngoc to push for a full investigation and strong prosecution in this case, and an end to the cruel and hazardous dog and cat meat trade throughout the country.