SIGN: Justice for Pit Bull Starved Within Hours of His Life 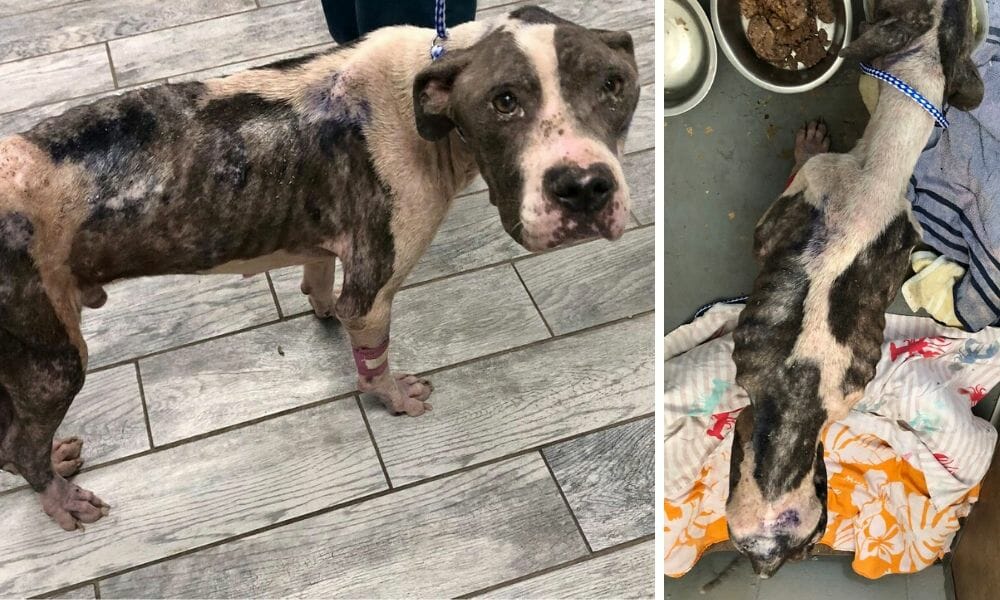 UPDATE (3/28/2022): Truman has made a miraculous recovery with the dedicated effort of Golden Animal Hospital staff and PAWS of Alabama-Montgomery, the rescue that took him in and paid for boarding costs. After 636 days of boarding and two days on the road, Truman has found his forever home with a family and companion canine in Massachusetts! Unfortunately, on the criminal end of things, we were not able to learn the results of a reported investigation by Tallapoosa County, which did not return multiple emails over the course of two months. Thank you to everyone who signed our petition, and we are overjoyed that this sweet boy finally has the loving forever home he deserves! You can read the full story on our website. —Lady Freethinker Staff

Starved down to skin and bones and “loaded with worms,” a pit bull named Truman languished for so long without food or water that rescuers believe without help, he would’ve been dead within an hour, according to WSFA 12 News.

Barely clinging to his life, Truman mustered what little strength he had left to miraculously break free from his chain and get the attention of the neighbor, who contacted PAWS rescue organization. Working quickly, vets desperately administered a lifesaving blood transfusion just to keep him alive.

Truman suffered through prolonged starvation and neglect, and it will take several weeks for him to even start returning to normal, according to veterinarian Dr. Mickey Golden.

This innocent pitbull deserves justice. Whoever deprived this innocent dog of his basic needs must answer for their crime.

Sign this petition urging Alabama State Attorney General Steve Marshall to call for local police to use all available resources to thoroughly investigate this heartbreaking case and identify Truman’s abuser(s).