SIGN: Justice for Dog Locked in Crate in the Woods to Die

Home » News » SIGN: Justice for Dog Locked in Crate in the Woods to DieBy Carly Day

UPDATE (3/22/2021): Spokane County investigators closed this case after they weren’t able to gather enough evidence to pin the crime to a person.

Public records obtained from the Spokane County Regional Animal Protection Services (SCRAPS) noted that Washington State Patrol (WSP) agreed to do a forensic analysis on items found with the deceased dog — namely, a Yuba coffee can, an afghan, and a cigarette butt.  Analysts found no finger prints on the coffee can and trace amounts of male DNA on the afghan and the cigarette butt. But due to a backlog of evidence to analyze, they declined to test hair and fiber samples also found at the scene against those trace amounts of DNA.  A Spokane investigator noted in an incident report that he attempted to contact the UC Davis Forensics Lab for further analysis but did not heard back, and without enough evidence to connect the crime to a person, closed the case.

We are disappointed that this case was closed while there was further analysis that could have been done to find and prosecute an individual, especially given a recommendation from a veterinarian — included in the public records documents — to charge any identifiable person with a county of first degree animal cruelty since the death of this dog was preventable, painful, and prolonged.

We thank the more than 26,000 people who signed our petition demanding justice for this poor female Jack Russell terrier. We hope she is now at peace, with her brutal suffering finally at an end. 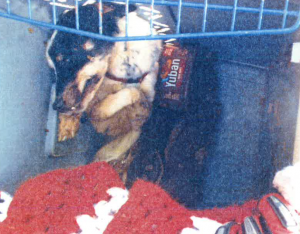 We hope this female Jack Russell terrier is now finally at peace from her suffering. (Image via SCRAPS)

Locked in a crate and dumped in the woods to starve slowly to death — this terrifying nightmare was a heartbreaking reality for a dog in Spokane County, Washington.

Passers-by discovered the crate near an intersection in Spokane Valley. When they looked inside, they saw the victim’s stiff, cold body and reported it to Spokane County Regional Animal Protection Service (SCRAPS.)

SCRAPS revealed in a Facebook post that the dog died from dehydration and starvation as a result of abandonment. She had pressure sores on three of her feet from her time spent locked in the tiny space.

While we don’t know how long the six-to-eight-year-old mixed-breed female was trapped in the crate, her death was “painful and prolonged,” according to SCRAPS.

Officers are still investigating this horrific case and looking for tips to identify whoever left this beautiful animal to die slowly, alone and in pain.

Sign this petition urging police to put all their resources into finding whoever did this, and prosecute them to the fullest extent of the law.

Anyone with information about the case is urged to contact SCRAPS at (509) 477-2532 and reference case number 2019-0160, or email [email protected] with the subject line “Attention Officer Loparco.”