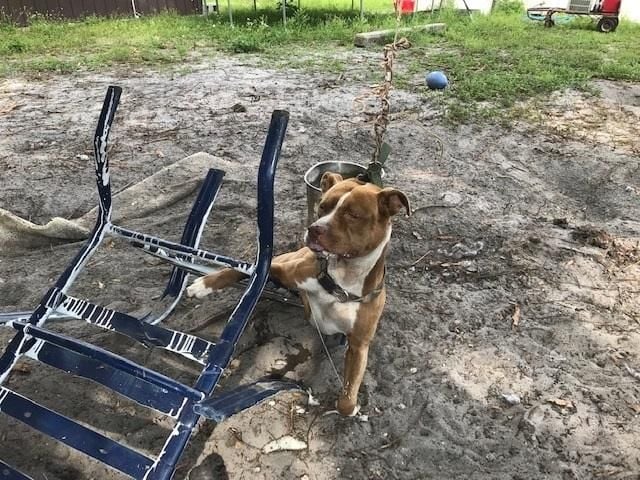 UPDATE (5/3/2022): On Nov. 4, 2019 Priscilla Smith was adjudicated guilty on one count of cruelty to animals and two counts of unlawful confinement of an animal.  She was sentenced to one year of probation, ordered to complete 100 hours of community service and to pay restitution in the amount of $5580 to the Humane Society, according to court records and clerk staff.  We thank everyone who signed our petition demanding justice for these innocent dogs. — Lady Freethinker Staff

In a tragic case of neglect, a dog in Indiantown, Florida, died alone and in agony as he strangled to death hanging from his chain.

Responding to a report of a dog in trouble, Marion County deputies and animal control discovered the body of the one-year-old pitbull dangling from a tree in the back yard. The chain had become wound around itself, lifting the animal from the ground by his collar.

On the same property, authorities found two other dogs tied to a shed. The water provided to them was filthy and covered in algae, while the food was old and buzzing with flies. Both dogs were riddled with fleas and had open wounds.

The Martin County Sheriff’s Office charged 35-year-old Priscilla Smith with one count of cruelty to animals and two counts of unlawful confinement of an animal. She was released on a $3000 bond.

With the privilege of caring for an animal comes the responsibility to ensure they are safe from harm and suffering; these dogs were failed by their guardian and she should be banned from caring for an animal ever again, so that no more animals endure this pain and neglect.

Sign this petition urging Bruce H. Colton, State Attorney for the 19th Judicial Circuit, to prosecute Smith to the fullest extent of the law and prevent her from having any more animals.