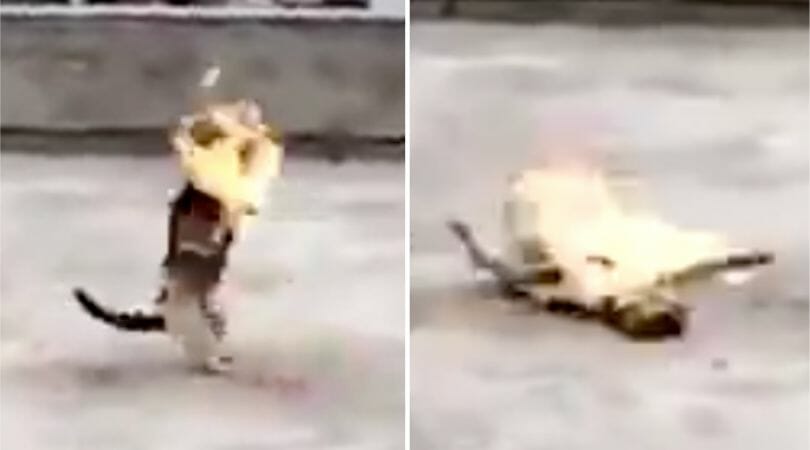 Around 80 innocent stray cats were skinned, gutted, burned, and electrocuted alive on video, allegedly at the hands of a university student in Shandong province, China, who sold the gruesome footage of his torturous acts online, according to Shanghaiist.

Over a short two-month span, dozens of cats were victimized on camera and endured unimaginable suffering during their terrifying final moments. The shocking videos show a man inflicting slow and painful deaths upon these helpless felines by setting them ablaze, striking and whipping them with various objects, and securing them in unnatural positions in what appear to be homemade torture devices. The visibly distressed cats try desperately to defend themselves, but are helpless against their attacker as he mercilessly continues his campaign of terror.

The man accused of making the sickening videos, Fan Yuanqing, has been expelled from Shandong University of Technology, according to a Weibo post by the university — but he has not been criminally charged. Campus police are reluctant to arrest Fan, who reportedly admitted to his acts in a social media post, because they believe he shared the videos from his home in Weifang, where police have also failed to take action.

Someone who is capable of murdering so many creatures in such a short time is likely to continue their behavior and must be taken off the street immediately, before they can harm any more animals. Regardless of where these unspeakable crimes took place, the person responsible for them belongs behind bars.

Sign this petition urging Cui Tiankai, the Chinese Ambassador to the U.S., to push the Chinese government to arrest and prosecute the suspect before he strikes again.