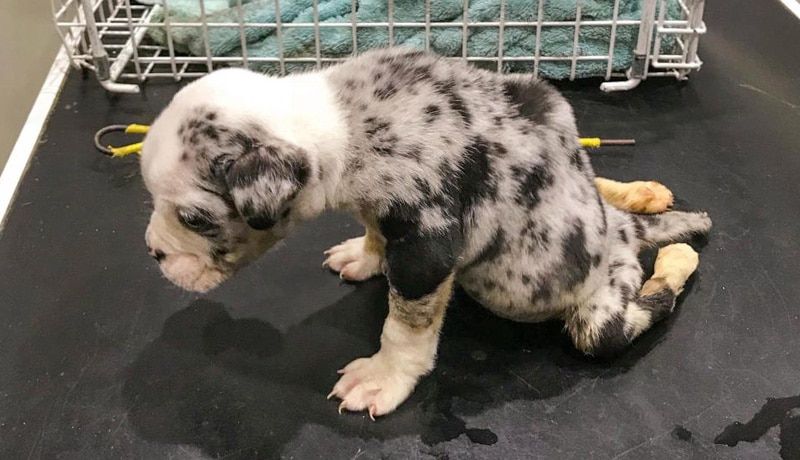 UPDATE (4/11/2022): No one was connected to this crime and the period to prosecute an individual has passed, an RSPCA’s Suzanne Norbury told Lady Freethinker. Norbury said during abuse and neglect cases, RSPCA investigators check in with local businesses and residents, appeal to the community through media and social media, and also have a dedicated hotline for people to submit information anonymously. But those methods didn’t bring forth any leads for investigators to follow in this case, she said.

“As an animal welfare charity, it breaks our hearts to think anybody could abandon an animal in such a way,” she said.

We are disappointed that nobody was held accountable for this heinous crime. We’ll continue to do all we can to advocate for animals, and we thank everyone who signed our petition on this sweet puppy’s behalf — may he now rest in peace. —Lady Freethinker Staff

On Christmas Day in Bradford, England, a passerby discovered a paralyzed puppy cruelly dumped in a cardboard box in an alleyway, left to die alone and in pain.

The tiny puppy was terrified and freezing, suffering a collapsed rear and dragging his legs behind him as he struggled to crawl. At just five weeks old, he was also too young to be away from his mother.

Investigators believe the puppy was likely abandoned by a breeder who didn’t want to spend money on his medical care and didn’t think anyone would buy him.

Sadly, vets determined that the puppy was unlikely to recover and was suffering; they felt they had no choice but to put him down. The only moments of compassion and love this innocent animal experienced in his short life were in his heartbreaking final hours.

It’s imperative that whoever left this puppy to die is brought to justice. Sign this petition urging the West Yorkshire Police to do everything in their power to find and prosecute the person responsible for this unspeakable act of cruelty.

Anyone with information pertaining to this crime is encouraged to contact the West Yorkshire Police by calling their inspectorate appeal line at 0300 123 8018 or through their online form.