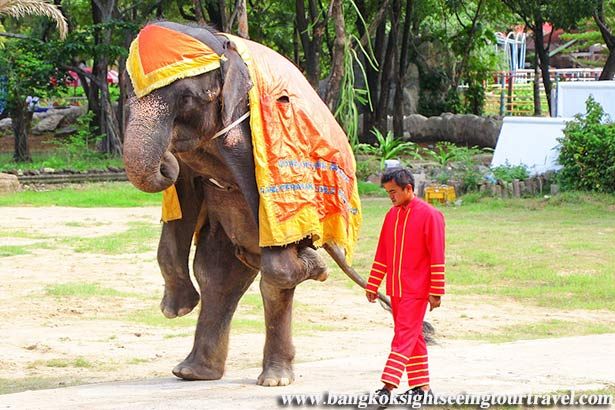 UPDATE (7/11/2022): We sent our petition, signed by more than 22,000 people, to the Thai Ambassador. We’ve since learned that the Save Elephant Foundation purchased one male elephant, Gluay Hom, and relocated him to the Elephant Nature Park, according to National Geographic.   The park itself filed for bankruptcy in 2021, according to the Royal Gazette, and the park’s listing online is now set to “permanently closed.” Thank you to everyone who spoke up for these poor elephants!

Animals at the Samutprakarn Crocodile Farm and Zoo in Thailand are starved and forced to live in squalor while being made to perform demeaning tricks for human entertainment.

Disturbing images of an emaciated elephant, taken by a concerned guest, have recently surfaced on the internet. The elephant is so shockingly thin, her ribs protrude and her leathery skin sags around her frail frame.

She’s one of at least two elephants at the park that have alarmed guests with their gaunt, skeletal appearances.

Since the photos were released, other eyewitnesses, including former employees, have commented about the park’s abhorrent conditions and the effects of the routine neglect that occurs there, such as animals desperately begging visitors for food.

The park’s owner, Uthane Youngprapakorn, admitted that the elephants are purposely kept underweight because it better enables them to perform dangerous tricks, such as walking on tightropes.

But it’s never okay to compromise an elephant’s health for the sake of entertainment, and the animals at Samutprakan Crocodile Farm and Zoo endure unnecessary and heartbreaking suffering at the hands of their caretakers.

Sign this petition urging the Thai Ambassador to the U.S., Virachai Plasai, to do everything in his power to free the elephants from Samutprakan and relocate them to safety.