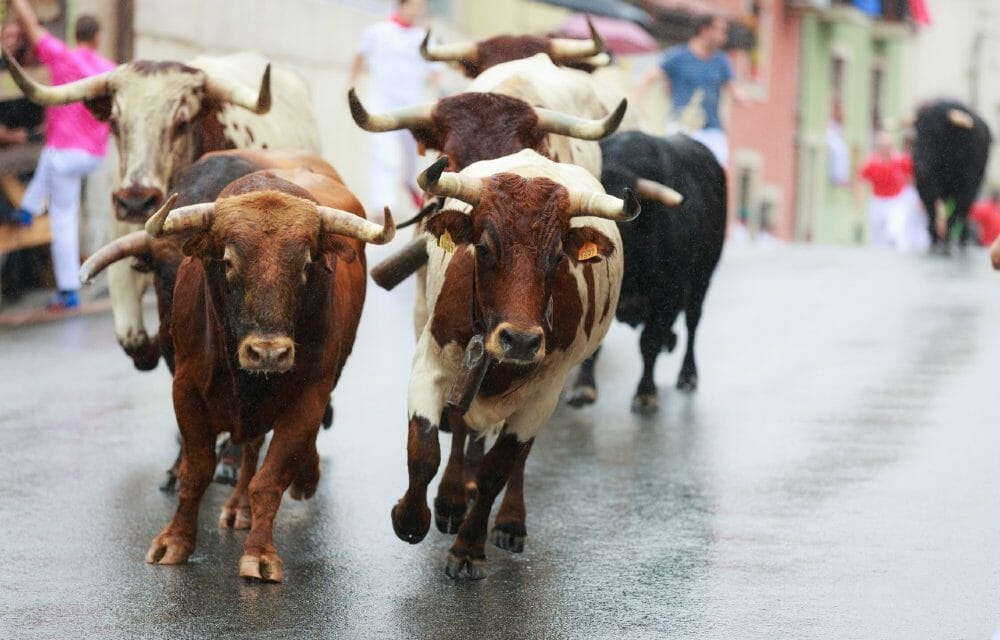 UPDATE (9/22/2022): We sent our petition, signed by more than 30,000 people, to the Spanish Ambassador. Thank you to everyone who signed! This entrenched brutality is continuing, but we won’t give up the fight for bulls. If you’re reading this, please sign our newest petition, in which an LFT observer uncovered extreme torture of bulls in the public view, to help us continue to be a voice for these animals. —Lady Freethinker Staff

Six innocent bulls in Ondo, Spain, were forced to run for their lives through a narrow city street while a crazed mob hit them with sticks and other weapons, in the latest episode of the brutal tradition known as the Running of the Bulls.

Each year, bulls are painfully prodded and jabbed by handlers to enrage them before being unleashed from a gate and chased for nearly three excruciating minutes.  The animals often fall and break bones and horns trying to escape, only to suffer long and painful deaths in front of a cheering crowd of thousands in the bullfights that follow.

It isn’t only bulls who are in danger. During this year’s event in Onda, a bull repeatedly gored a 55-year-old man, who suffered a perforated artery in his thigh and bled to death from his injuries.  His death wasn’t the first time the tradition has led to fatalities and injuries for bystanders or matadors.

It is long past time for this ritual of grotesque torture to be banned — for the safety of both bulls and humans.

Sign this petition urging Spanish Ambassador to the United States Santiago Cabanas to call for a complete and permanent ban on bull running and bullfighting, ending this needlessly cruel, traumatizing, and deadly bloodsport for good.