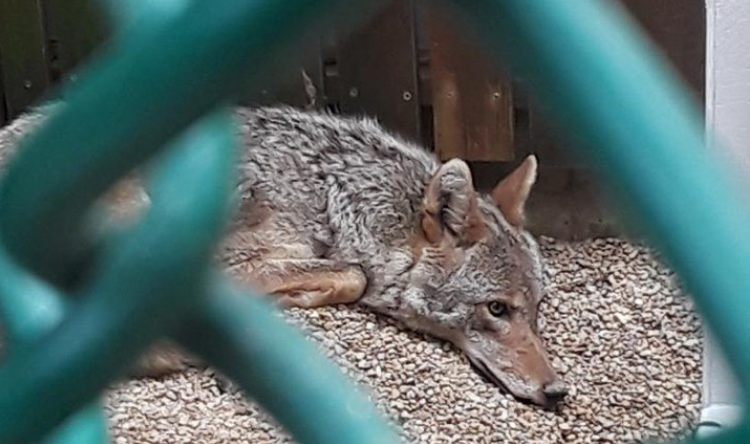 UPDATE (6/22/2022): Luna stayed at a coyote preserve in Willowbrook while Tomi Tranchita fought her case, according to Patch. Tomi had pleaded guilty to not having a permit for Luna in order to get Luna to the preserve while the case is ongoing. Tranchita told Lady Freethinker in June that she has been able to bring Luna home and that she is doing great, especially given that the coyote is 16 years old! –Lady Freethinker Staff 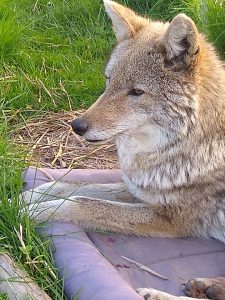 On April 24, six officers led by the Illinois Department of Natural Resources (IDNR) stormed into a licensed private residence and violently seized four rescue coyotes from the only home they’ve ever known. The officers chased the terrified coyotes into a corner, shot them with tranquilizer darts and forcefully dragged them away from safety with choke poles.

Since then, three of the four precious coyotes have died. Luna, the sole survivor, has been held in isolation for months without her packmates and the only familiar human she trusts. She lies spiritless day and night, paces, and is lonely, depressed and wasting away.

Luna’s caregiver, Tomi Tranchita, has cared for coyotes that were too habituated for release ever since Luna and her packmates were dropped at a local animal shelter 13 years ago. In order to legally care for them, she obtained a USDA license and IDNR state permits and built above the board enclosures on her property.

For 13 years, Luna and her packmates lived a happy life with Tomi. The coyotes received enrichment and hours of devotion and attention every day. Until they were cruelly confiscated, they only ever knew kindness from humans.

Tranchita is passionately fighting in court to get Luna home, where she can heal from her trauma and live out the rest of her life in peace. The state is claiming she needs to have a Hound running permit, which is the brutal practice of training hunting dogs to Corner attack and kill coyotes. However all other facilities in the state with Ambassador and educational coyotes are in fact not required to have this permit. Torturing coyotes under this type of permit could not be further from the education programs Tranchita strives to teach the public.

Sign this petition urging Illinois Governor Pritzker to intervene; stop Luna’s suffering and send her home where she belongs.

PETITION UPDATE 4/28/20: It has been one year now since Luna the coyote has been held in isolation. This also marks the beginning of a 12-month court battle that continues between Ms. Tranchita and the State of Illinois for the right to have her one surviving coyote returned. Lady Freethinker will continue to advocate for the return of Luna to her home and speak out against the state’s treatment of innocent wildlife.