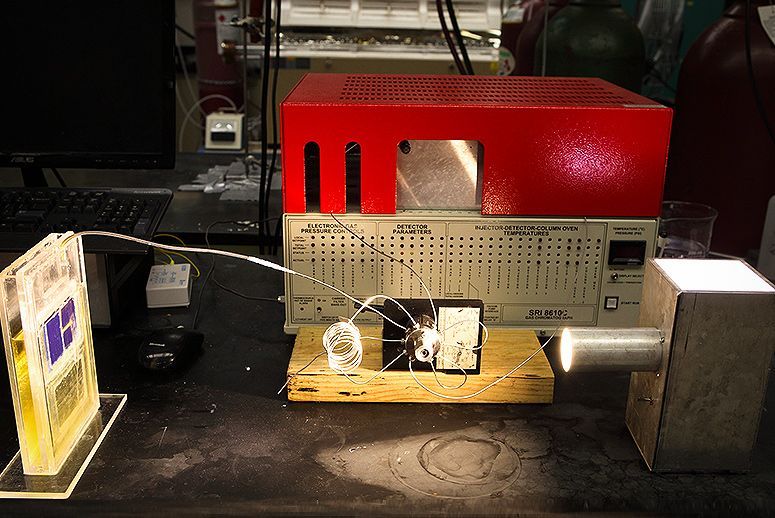 University of Illinois at Chicago/Jenny Fontaine

Climate change is charging forward at full speed. In twenty to thirty years, the earth will experience major changes in heat waves, sea levels, droughts, and more severe weather unless we can reverse some of the damage that has been done.

Removing the excess of carbon monoxide in the air is a pressing concern. According to the Environmental Protection Agency, carbon dioxide comprised 80.9% of the greenhouse gas caused by humans in 2014.

Now, scientists have a possible solution — new technology can absorb carbon dioxide from the atmosphere and convert it into a hydrogen and carbon monoxide blend called “syngas” or synthesis gas. The syngas is made into diesel and other liquid fuels. It can also be used in its original state.

The scientists who created this miracle transformer are from the University of Illinois in Chicago. Their objective is to manufacture fuel for two dollars a gallon, which is commensurate with current prices. Using the fuel will emit carbon, so the procedure is “carbon-neutral” — meaning carbon is recycled.

Team leader Amin Salehi-Khojin, a mechanical engineer, describes the mechanism as a “real artificial leaf.” The process is truly photosynthesis — the process by which plants use sunlight to synthesize food from water and carbon dioxide into energy. This procedure stores the energy of the sun in the chemical bonds of the syngas.

A prototype has been built, and mass production and distribution would reduce gas in the atmosphere and reverse atmospheric damage in the future.

University of Southern California researchers have also been experimenting with ways to remove carbon dioxide from the atmosphere by converting carbon dioxide into methanol, which is then used in fuel cells. Traditionally, fuel requires petrochemicals for production. Petrochemicals are a large source of pollution, are not renewable, and cause damage to our planet and to us.

Using carbon dioxide is a clean way to make fuel, and that fuel burns without emitting toxins. The low temperature that the scientists use in the process is sustainable, as it removes carbon from the air. Methanol can be used for fuel until the technology to develop fuel from carbon dioxide is perfected.

A similar study is underway in Canada. A company called Carbon Engineering (which Bill Gates has invested in) is working on producing a system to suck the carbon dioxide out of the atmosphere and turn it into zero-carbon e-diesel fuel.

It will take some years until any of this technology can be widely used. Still, it’s encouraging that we can remedy the excess carbon monoxide in the atmosphere and harness it as fuel. These types of innovations can save the planet.