Home » Animals » Rescuing Sick and Dying Animals From Factory Farms Is the ‘Right Thing To Do’ For Activist Wayne HsiungBy Lex Talamo | May 24, 2021 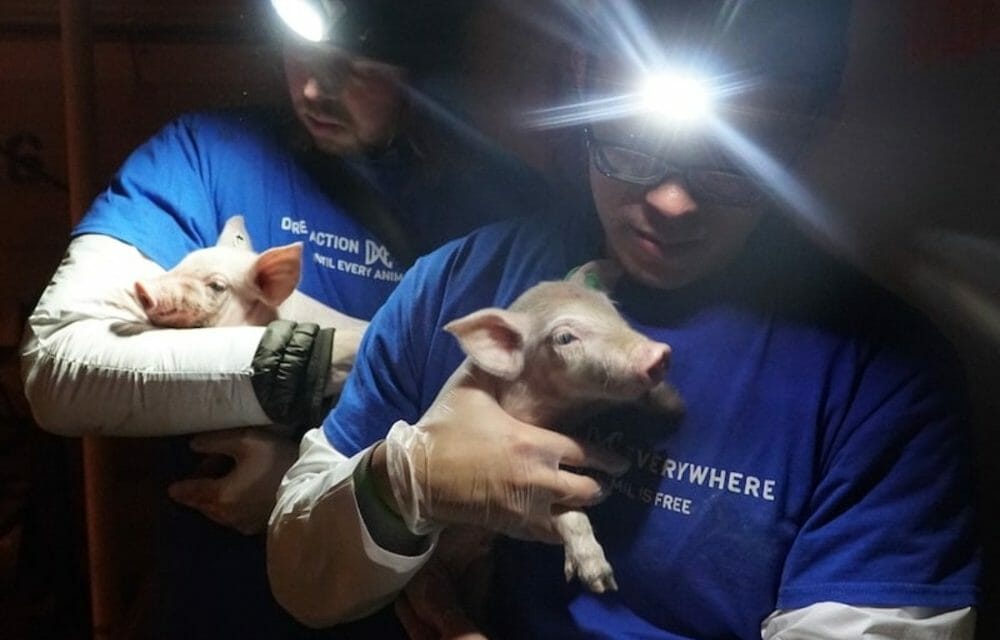 First, the volunteer team from Direct Action Everywhere (DxE), including co-founder Wayne Hsiung, climbed the fence, dodging the barbed wire at the top.

Then, they infiltrated the certified “humane” and “cage-free” egg farm in Petaluma, Calif., where they videotaped birds in confinement, preening from stress, lacking water, and missing feathers.

They picked out the sickest birds — those very close to death — and handed them back over the barbed wire fence. Then, they took the severely ill birds to a vet for life-saving treatment.

That rescue is just one completed successfully by Hsiung, an attorney and animal welfare advocate who faces 17 felony charges and more than 60 years in prison due to his “open rescue” activism — so called because he and his team of volunteers don’t disguise their identities to gain access to the facilities.

They also don’t hide their actions from the world, but rather broadcast them via sophisticated streaming and social media to take viewers right alongside them in their missions and so raise awareness about conditions faced by exploited animals everywhere.

Hsiung, who grew up in Indiana as the son of Chinese immigrants, described himself as an awkward outsider during his childhood years who connected more with the primates at the local zoo he visited than his school-aged peers.

His father, a pharmaceutical researcher, also did work involving vivisection on animals for a period of time — procedures that horrified Hsiung and inspired him to become a voice for animals.

After graduating from the University of Chicago with a degree in political science, and from law school with a focus on behavioral law and economics, Hsiung worked as a lawyer who focused on environmental activism before his path led him to co-found DxE in 2013.

Hsiung is well known for the daring open rescues and investigations his team performs. In 2015, they infiltrated a certified “humane” egg farm in Petaluma, Calif., videotaped birds without water and with blisters and missing feathers, and rescued a sick chicken they took to a veterinarian.  The next year saw Hsiung in Yulin, China, documenting dogs being beaten to death at the Yulin Dog Meat Festival. Other investigations resulted in DxE’s rescuing two injured piglets from a Smithfield pig farm in Utah in 2017 and several sick and dying chickens from Santa Rosa Egg Farm and Petaluma Poultry in California.

The nonviolent operations haven’t come without great risk or reaction.

In the Utah rescue, FBI agents descended on local farmed animal sanctuaries and cut a two-inch slice out of a sanctuary animal’s ear to test DNA in their own hired mission to find the missing piglets. At Petaluma Poultry, Hsiung said dozens of deputies and a helicopter arrived on scene to arrest the activists. Members of DxE internationally face felony counts for burglary, racketeering, and domestic terrorism, among other charges.

Why won’t Hsiung be silenced or stopped? And why does his approach and mission — “Until Every Animal Is Free” — resonate with so many, given DxE’s more than 50 active chapters in more than 20 countries?

Because rescuing sick, injured, and dying animals and giving them the comfort and medical treatment they deserve as sentient beings in a nonviolent way is hands-down the right thing to do, Hsiung said.

When did your connection to animals start? Why did you decide to become a voice for animals?

I was a very lonely kid. My parents moved to this country in the late 1970s. The Chinese community was non-existent in Central Indiana. My parents English was quite poor, and we didn’t have too many friends. If not for animals, I don’t know if I would have made it through. My parents would take me to the zoo, and I would interact with the monkeys. They were so interesting and curious, and I was so used to people not really wanting to be around me. I was a sad kid, I had glasses, I had terrible clothes because my sister’s hand-me-down clothes became my clothes.

I was absolutely humiliated and mocked and no one wanted to be near me or to sit near me when I was at school, but these monkeys were so curious. They wanted to play with me, and they thought I was cool. As a 6, 7, 8-year old child, it was just honestly the highlight of my life. It wasn’t until a couple of years later, when we went to China, that I saw monkeys in smaller cages, that I started thinking to myself, “Wait a minute, if these are my friends, and they have the same sort of feelings that I have, why are they stuck in a cage?” It started me down a trajectory that led me years later to realize there is something deeply and profoundly wrong about how we conceive of animals in our society.

Did you experience any racism or discrimination because of your Asian descent, either growing up or upon entering the Animal Rights movement?

It’s little known but if you look at the Asian American population in the United States, more people from Asian descent experience racial slurs and racist harassment than any other group. There’s a perception that folks of Asian descent, and I’d say particularly Chinese folks, are  foreigners. It doesn’t matter how long your family has been here, it doesn’t matter how much you’ve tried to prove you are a worthy member of our community, you are still an outsider. In preschool even, I remember kids making fun of me for my eyes, making fun of my accent, for my English, for absolutely the fact that I am of Chinese descent.

What would you like for people to know about Asian people’s contribution to animal rights?

There are an extraordinary amount of Chinese who are stepping up, in China and the United States, to protect endangered species, like elephants. Yao Ming is probably the most famous example, but there are literally millions upon millions of people in China who are against ivory and hate, hate, hate what is happening in the wildlife trade. It’s one of the reason’s the Chinese government was able to ban the wildlife trade. I know it’s not being fully enforced and there are loopholes, but the reason they are moving in that direction is that people do care.

Can you tell us more about what an “open rescue” is and why you decided to use the approach?

Open rescue is the embodiment of animal liberation. When we envision a world where every animal is treated with kindness and compassion, what does that world look like? It looks like a world where if an animal is suffering or scared instead of continuing to abuse her and hurting her, commoditizing, selling, and exploiting her, we give her help. It’s a very common sense moral intuition that most people have.

But our society has transformed our relationship with animals to the extent that this common intuition we have — there’s an animal hurt in the street, let’s help her — has somehow, when it comes to the industrialized confinement and exploitation of animals on a scale of billions, been transformed by our society from being a praiseworthy act of heroism to a crime.

But the key thing is that when you actually get an opportunity to tell your story and show people exactly what you are doing, it’s hard to erase that commonsense moral intuition that most people have. So no matter what our legal system, the corporate world, is telling us about what these actions are, open rescue is, to me, both the bravest act of defiance and the most persuasive and morally intuitive act that the animal rights community can engage in.

I rescued this animal from one of the largest corporations in the world, that has immense political power and was doing this intentionally because they wanted to make money, and furthermore, I am being decried as a terrorist criminal. That to people is such a powerful illustration of what’s wrong with our society today. They are emotionally moved to the point where they want to participate because it feels so emotionally right what you did, and that it’s being decried as a crime.

That awakens people and makes them think about what else is wrong about our society. If the mere act of animal rescue is being criminalized, then they may need to rethink some of the other things they’ve been taught, for example, about what they need to eat every day and whether the meat, eggs and dairy they are eating on a daily basis are in fact humane, because if I am being lied to in an obvious and egregious way when it comes to the rescue of an animal in distress, then maybe I am being lied to about other things too and I may need to rethink some of my other practices, and even more, join the movement that’s trying to create change.

Do you have any advice for people wanting to get involved with the animal rights movement?

Social change is not hunky-dory. There is going to be some pain, and that is part of the process. If there is no struggle, there is no success, and what works today is not going to work tomorrow. When you go against a powerful system, no one tactic is going to work. You have to be dynamic and change. There also is some inner work you have to do, before you can go out there.

Find your voice. Find some friends. And fight like hell. 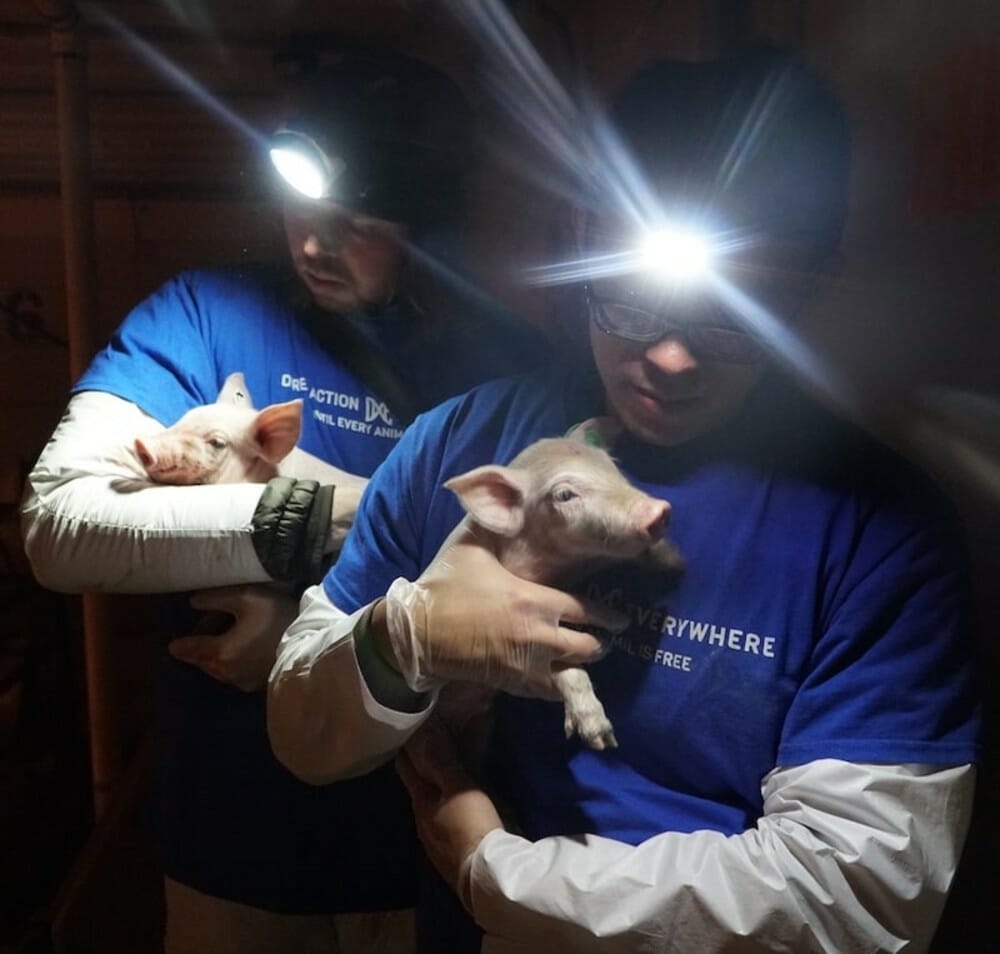