Potbellied Pig Goes on the Run at Thanksgiving 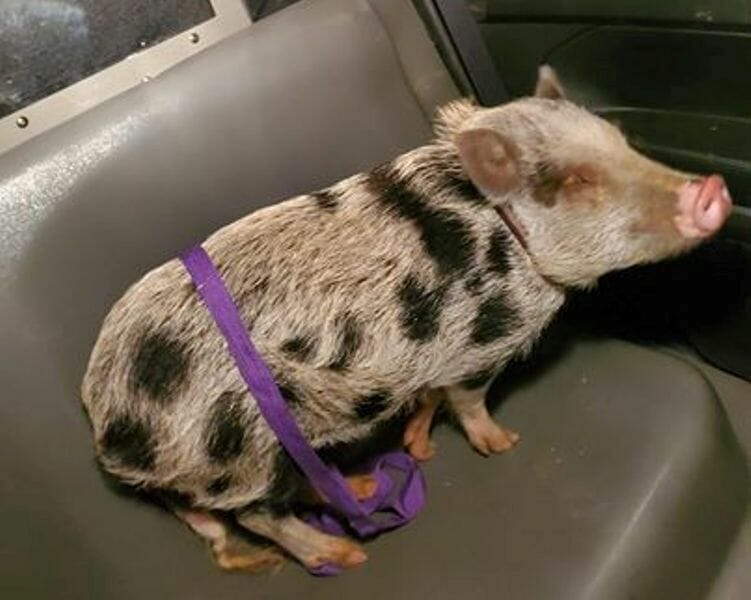 A cute potbellied pig was apprehended by Bethlehem Police on Thanksgiving eve after reports of “a suspicious individual rummaging through people’s trash” ended in officers pursuing and capturing the porcine suspect.

“The pig did briefly keep officers at bay by barricading itself in a small area, but Bethlehem Police Officer Heaton was able to successfully negotiate a resolution,” said a post on the force’s Facebook page.

After being taken into custody, the pig — whom her rescuers name Bonnie after one half of the crime duo Bonnie and Clyde — was transferred to the safety of Logan’s Heroes animal sanctuary in East Greenville, where she is being taken care of until her owner is found or she is adopted.

“She just wanted to snuggle,” explained sanctuary owner Chris Baringer. “She was cold and tired and very hungry, and she just wanted to get under a blanket and sleep. She was exhausted. She’s a very sweet pig. I’m glad we could take care of her.”

The 25-pound pig is believed to be an abandoned pet. Unfortunately, Baringer says it is not unusual for potbellied pigs to be given to rescue centers or simply abandoned. Unscrupulous breeders sell what they claim are small “teacup” or “mini” pigs, but when the animals continue to grow, the owners can’t cope.

Thankfully, Bonnie is safe and well, but there is a serious side to this tale of a pig on the run. It’s important to remember that however adorable piglets are, they are not suitable to keep in most domestic situations. So, please don’t be tempted to buy one from a breeder as they may end up in a situation just like Bonnie’s.

Police are requesting anyone with information about where Bonnie came from to contact the Bethlehem Service Center on 610-865-7180.