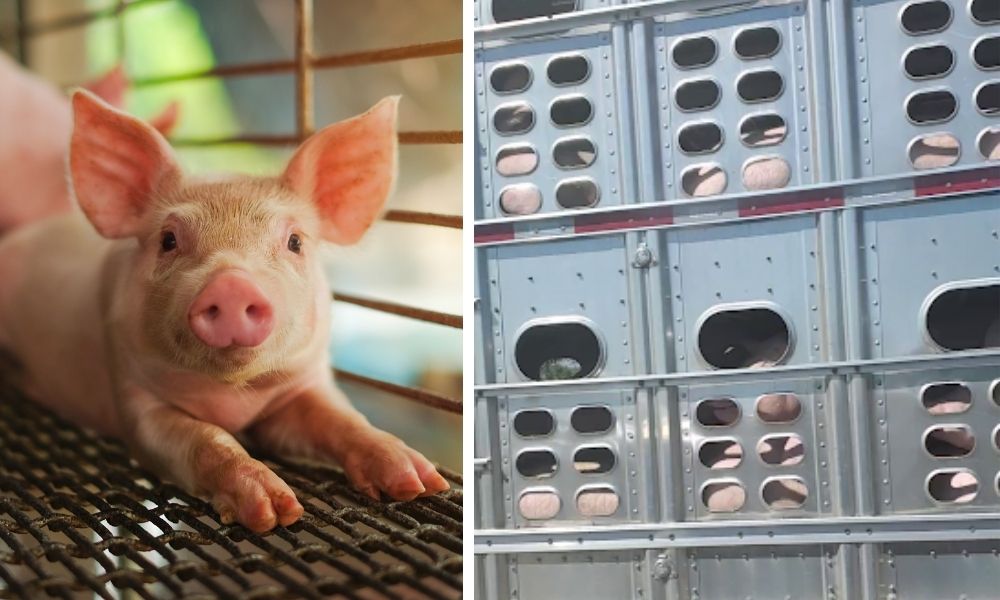 A torturous 1,200-mile journey that forced a crowded truckload of pigs to suffer through sweltering summer temperatures for more than 30 hours allegedly without once being let out for food, water or rest, has been documented by a nonprofit investigation.

Investigators from Washington, D.C.-based Animal Outlook followed a truck reportedly owned by Isaacson Truck Line Inc. for the entirety of the grueling nonstop trek from Nebraska to California in August 2021. Temperatures on the trip reached 91 degrees, and investigators documented pigs vocalizing at night while confined in the metal-caged trailer.

Isaacson Truck Line could not be reached via the only contact information available online despite numerous attempts.

For as horrific as this case is, the suffering of these sentient animals is only a fragment of the overall abuse of animals during transport for animal agriculture each year. Loud noises, motion sickness and dehydration put a huge amount of mental and physical stress on animals. In high temperatures, exhaustion, dehydration, heat stress, cardiac arrest and sudden death can frequently occur.

Nearly 4 million chickens, 726,000 pigs and 29,000 cows die during transport every year, according to one estimate from Sentient Media.

While the Twenty-Eight Hour Law prohibits transporting animals for more than 28 consecutive hours, without unloading them for at least five hours of rest and providing water and food, the perilous conditions continue, said Cheryl Leahy, AO’s executive director.

“Although it is clearly illegal under federal law, gruelingly long transport with no opportunities for rest, food or water is a commonplace reality for farmed animals because the law is woefully under-enforced,” Leahy said.

Animal Outlook’s research revealed that there were just 11 USDA enforcement inquiries into potential violations in a recent 12-year period.

Leahy added that U.S. protections are lagging behind other agencies’ such as within the European Union, where animals must be allowed to rest and given food and water every eight hours.

“We’re calling on the USDA and the Department of Justice to enforce this law on the basis of our investigation and wherever violations occur,” Leahy said.

Those who want to make an immediate difference for animals suffering in the food system can make the conscious choice to choose a plant-based lifestyle. There are many free, affordable, and delicious recipes online as well as already-made products for those who may be short on time.