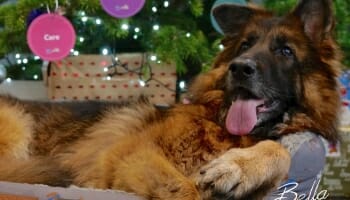 Bella, an 11-year-old Belgian Shepherd rescued from an icy river with a 77-pound rock tied to her neck, has been nominated for a national bravery award.

The Radcliffe Animal Center, which cared for Bella for 14 months after she was pulled from drowning in the River Trent by a caring passerby, said that the dog’s journey “can only be described as a remarkable recovery,” according to the Grimsby Telegraph.

Bella’s resilience led the animal center to nominate her for the Naturo SuperDog Survivor Award — an annual recognition of a heroic dogs who has “shown exceptional bravery in an extraordinary situation,” according to the contest’s website.

Jane Harper, the passerby who rescued Bella on a cold morning in January 2020, said the dog had survived by resting her head on a rock while the rest of her body was weighted underwater, according to the BBC.

A veterinarian told the BBC that Bella would have died had she not been rescued and treated when she was.

Bella’s age — and several underlying health conditions — were acting against her, but she miraculously survived. She also has gone on to live a joy-filled life in her new forever home with guardians Maggie and Charlie.

Maggie told The Grimsby Telegraph that Bella has settled in “far more than we thought she would.”

“I knew that we could definitely give her a fantastic home,” Maggie said. “We feel what happened to her, and the way she may have been treated because of her physical condition and her injuries, that she deserves a lot of happiness now.”

“She’s an absolute gem,” Charlie added. “We love her to bits.”

Charlene Latham, Bella’s former owner, was sentenced to a 12-month community order and court costs, as well as being disqualified for owning any other dogs for three years, by the Nottingham Magistrates Court in March for causing unnecessary suffering to an animal. Similar charges were dropped against Leigh Johnson, Latham’s ex-partner who denied throwing Bella into the river, when the court found insufficient evidence to implicate him.

Lady Freethinker is overjoyed that this brave and beautiful dog has found a loving new life and is being recognized for her incredible bravery. We thank the more than 38,000 supporters who signed our petition demanding justice for Bella.