SIGN: Justice for Bulls with Ears Cut Off And Given to Children as ‘Trophies’

Home » Animals » SIGN: Justice for Bulls with Ears Cut Off And Given to Children as ‘Trophies’By Cassandra Cyphers 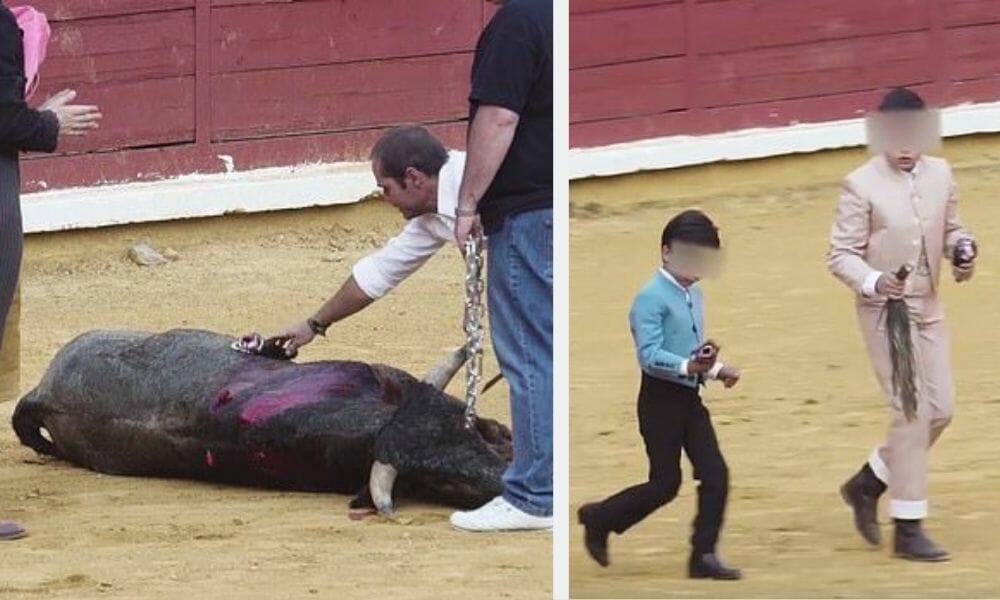 UPDATE (11/4/2021): We sent our petition, signed by more than 26,000 people,  to Spanish Ambassador Ramón Gil-Casares Satrústegui. Thank you for helping us condemn this cruel and brutal blood sport. Although the country has not yet ended brutal bull fighting, we will continue to advocate for bulls in Spain. If you haven’t already, sign our updated petition, calling for an end to both bull running and bull fighting in Spain.

Student bullfighters in training repeatedly skewered helpless young bulls in an annual bullfighting event in Cordoba, Spain. As the tortured bulls lay weak and dying, adults hacked off their ears and tails and presented them as trophies to the children in front of a cheering crowd.

It can take several minutes for bulls to die from this horrific act of cruelty in the name of human ‘entertainment.’

In Cordoba, children as young as 14 can legally attend any of Spain’s 55 bullfighting academies. The children are exposed to incredibly high levels of violence during training. Throughout the year, the students torment and kill young bulls in public arenas as part of a promotional campaign for bullfighting schools in Andalusia.

The young bulls most likely suffer more even pain than usual due to the children’s inexperience.

We urge the Spanish government to shut down these barbaric schools that train young children to torture innocent animals. These children, as well as the innocent and beautiful creatures they are trained to slaughter, deserve much better.