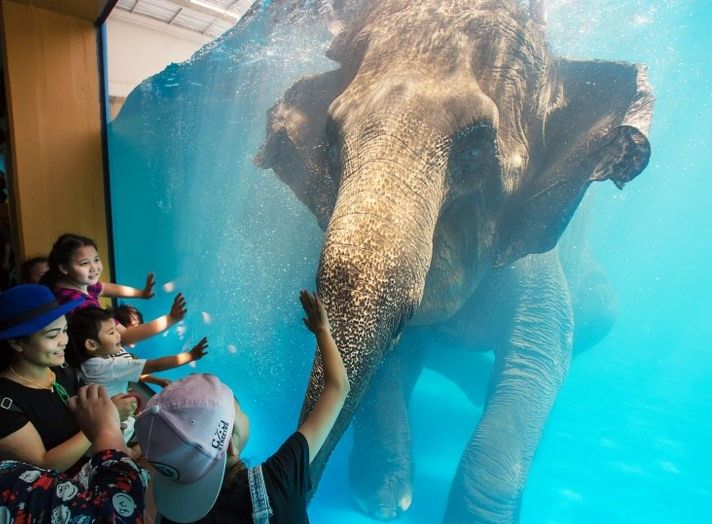 UPDATE (4/7/2021): Unfortunately, the Khao Kheow Open Zoo in Thailand remains open, with continued exploitation of animals for entertainment. But the good news is that the cruelty has not gone unnoticed.

The zoo’s treatment of animals has sparked international outrage and made international headlines, including in Newsweek — which noted that more than 134,000 people from around the world had signed a petition and asked the Governor of Chonburi Pakarathon Tienchai to shutter the zoo and turn the animals over to a sanctuary where they could live their lives in peace.

We are glad that the negative publicity has raised awareness about the horrific cruelty that captive elephants undergo at tourist attractions like this, and we will keep fighting for animals everywhere so that one day, cruel places like this zoo will no longer be able to profit from animal abuse.

Thank you to the more than 26,000 people who signed our petition, raising awareness and letting this zoo know that — on our end — animal torture will not be tolerated.

At Khao Kheow Open Zoo in Thailand, elephants are terrorized every day to perform underwater tricks on command for the crowds. The animals suffer demeaning violence as trainers kick, hit, and pull on the elephants’ ears to force them underwater during the show.

A horrifying tool known as a bullhook — a sharp, pointed rod — is used to instill fear in the elephants and force them to comply with trainers’ demands. This fear allows staff to psychologically torment the elephants to control them just for human entertainment.

Their PR team continues to insist that the zoo has an acceptable level of ethics management, but that is blatantly false. This is a despicable example of corporations putting profit before animal safety and wellbeing.

TripAdvisor has suspended sales to the zoo through their website, but that is not enough. Sign this petition to urge the Thai ambassador to push to end this inhumane practice once and for all and to encourage the zoo to release these elephants to a sanctuary where they will be safe from intimidation tactics and physical torment.