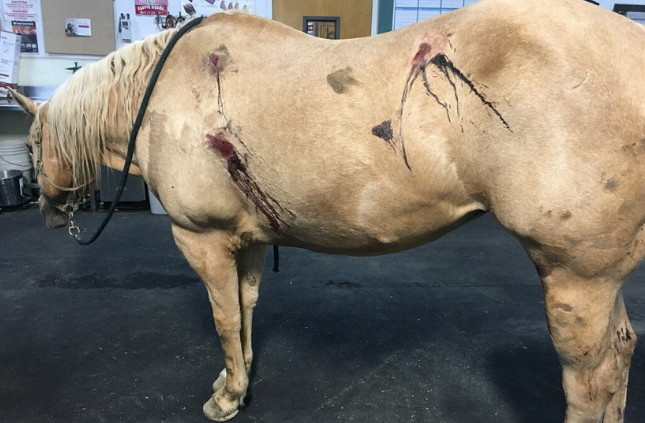 UPDATE (5/23/2022): Michael James Congdon pleaded nolo contendere — a legal term meaning he would accept a conviction without admitting guilt —  to counts of premeditated murder, shooting at an occupied vehicle and cruelty to animals, for which he received respective sentences of 25 years to life with eligibility for parole, 5 years, and 8 months, to be served at the Wasco State Prison, according to court records. Although we are grateful that the totality of the actions in this case resulted in a serious sentence,  and that the animal cruelty charges were not amended or dropped, we are disappointed that at an act of such intentional and brutal cruelty to animals was only given an 8-month sentence. We’ll continue to do all we can to urge prosecutors to treat these cases with the severity that they deserve. — Lady Freethinker Staff

A horse in Fresno County, California was shot multiple times by a man using a semiautomatic rifle in a heated dispute over property lines.

Photos of the injured horse show blood pouring from at least three wounds on the side of the body, with more blood visible pouring down one hind leg.

It’s likely the injured horse suffered in agony for hours before authorities discovered the animal; the incident was reported at 11 am on the 2nd of July, and the situation wasn’t resolved until after 3 pm that afternoon.

Detectives took the horse to a local veterinarian for treatment. While the animal is still alive, prognosis for recovery remains unclear.

Police arrested 57-year-old Michael James Congdon at the property after he shot and injured Fresno Sheriff’s Deputy John Erickson, the officer called to the scene after the initial gunfire was reported.

The Fresno County District Attorney charged Congdon with attempted murder and other offenses — including animal cruelty — and set bail at just over 1.9 million dollars.

Congdon is clearly unstable and highly dangerous to people and animals. While he will likely be strongly prosecuted for injuring an officer — and rightly so — we must speak out to remind prosecutors that the suffering of this innocent horse is a serious matter, as well.

Sign this petition urging Fresno County DA Lisa Smittcamp to prosecute this man to the fullest extent of the law, ensuring he can never harm a living being again.