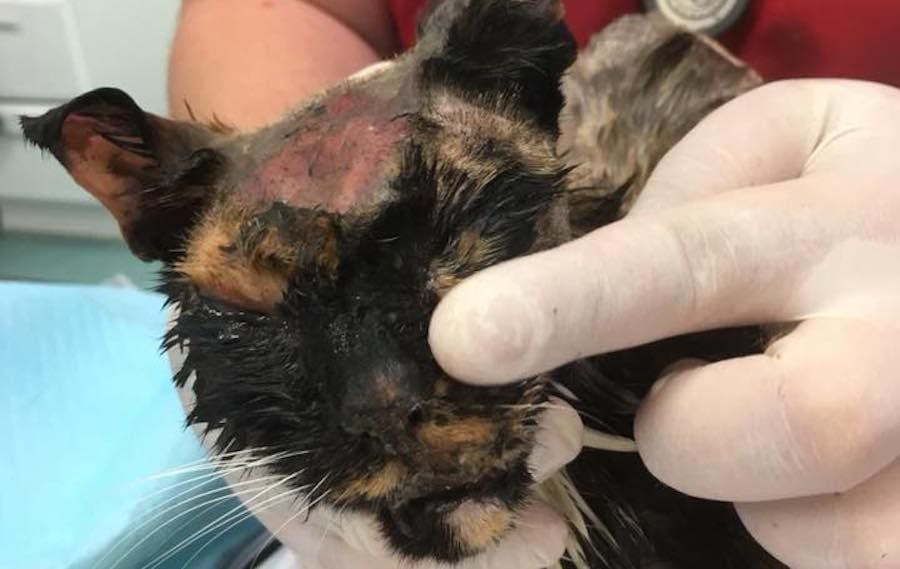 UPDATE (7/7/2021): Georgie had major life saving surgery and has survived her injuries. She had to have a further small operation to help her nose area, as this was the only bit that did not heal properly.

Lady Freethinker checked in with the Exeter Police to see whether Georgie’s case was still open or had been closed but was not able to obtain any additional information, with a police spokesperson saying the case could not be discussed.

“Due to data porotection [sic] we cannot go into the details of this crime,” the Exeter Police said via email.

We thank the more than 19,800 people who signed our petition. While we are disappointed that no one was connected to this crime, we are overjoyed that Georgie recovered, and we will continue to fight for animals like her everywhere.

Georgie, a family cat in Exeter, England known for loving and trusting humans, is now fighting for her life after someone viciously attacked the sweet tabby with battery acid, severely burning her face and body.

When Georgie staggered back home after the attack, she was foaming at the mouth and missing large swaths of fur. Her mouth, tongue and throat are burned so badly, she cannot eat. Even if she survives, she will likely lose her ears and may be permanently blind.

Georgie is under veterinary care, but if she is badly burned internally, she will not survive.

This sickening torture of a gentle, loving cat is inexcusable.

Whoever poured acid on Georgie must be found at once, as they are a dire threat to the community.

Sign this petition to urge Exeter police to put every effort into finding and apprehending this sick individual, so that no more animals or humans will suffer this horrific fate.