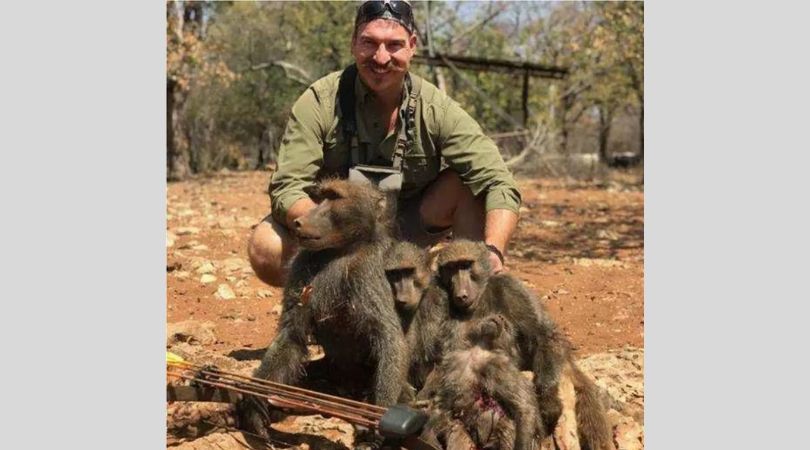 It’s a photograph that makes your stomach turn: Idaho wildlife officer Blake Fischer beams as he displays the lifeless bodies of an entire family of baboons, joyful at the massacre of the animals he has just brutally slain with a bow and arrow. The smallest baboon has blood leaking from its stomach, evidence of the fresh, fatal wound.

“So I shot a whole family of baboons,” Fischer boasted in an email he sent to over 100 people.

On this bloody hunting trip in Namibia, Fischer and his wife shot and killed over 14 animals, including giraffes, leopards, antelopes, and impalas. He then posed proudly with his slain victims.

The cruelty is sickening enough on its own. But even worse is that Fisher serves on the Idaho Fish and Game Commission, making decisions that affect wildlife throughout the state — including decisions about hunting regulations for grizzly bears, wolves and other animals often killed as “trophies.” This man has no business serving as a wildlife official, and should be immediately dismissed.

Sign this petition to urge Idaho Governor Butch Otter to fight for Fischer’s resignation. This cold-hearted killer should never have a position where he is responsible for wildlife again. We need to make it clear that trophy hunting is unacceptable, and killing animals is nothing to smile about.

UPDATE: We are thrilled to announce that, upon request of the governor, Blake Fischer has resigned from his position. We applaud Governor Otter for taking action, and implore him to treat all cases of animal cruelty with the severity they deserve.